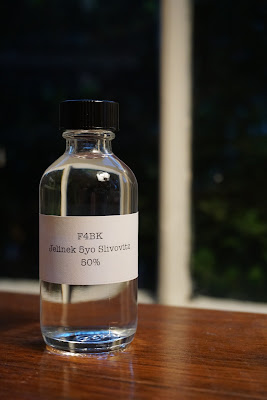 Jelinek 5yo Slivovitz (50.0%): Another non-whisky sample today from the well known Jelinek distillery which is producing Slivovitz in the small city of Vizovice in Czech Republic since late 19th century. Although their iconic bottle and label design is a famous trademark all over Europe it is rarely seen on this side of Atlantic. For those who are not familiar with Slivovitz is a fruit brandy distilled from damson plums. It is very popular in Eastern Europe and almost every country in that region has its own brand. It is bottled non-aged right out of the still or after rested in stainless steel tanks for a period of time or after aged in oak casks. This one I have the sample of is triple distilled and rested in stainless steel tanks for a period of five years.

Palate: Slightly bitter and spicy entry. Cracked black peppercorns, whole cloves and allspice. Plum and currant notes evolve a little later. Not so sweet like expected after the aromas we got from the nose.

Finish: Unexpectedly long... Mostly black pepper and alcohol burn on the lips and sides of the tongue. Weirdly satisfying though... You don't want to talk but just listen to the slow sizzling fade out with spicy and fruity notes.

Overall: Slivovitz is one of the spirits I oddly enjoy generally rested in stainless steel tanks but not in oak casks... And this one is a great example how the spirit can mellow and shake off all the harsh young alcohol notes after patiently resting five long years. If you are not into this kind of stuff it will taste off and young but if you like to broaden your experience in different regional distilled beverages and start with a reasonably priced but quality product you should definitely give it a try. Thanks to Florin for the sample...