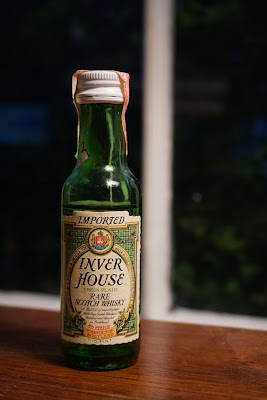 Inver House Green Plaid (1977 - 1980) (43.0%): The last bottle of the three blends I tasted for the Blend Project this week is an Inver House Green Plaid. It is possibly from between 1977 and 1980 as far as I can figure out from the red US tax stamp and its original label. Inver House brand was established as "Inver House Rare" by Publicker Industries in 1956 which was an American company from Philadelphia. They acquired a whisky distilling complex at Airdie a few years later and started to blend the Inver House line blended Scotch whiskies. The company and the brand was sold to Pacific Spirits Group in 2001 and became eventually a part of Thai Beverages later. Now the label is under the same umbrella with Old Pulteney, Speyburn, Balblair, Knockdhu (Ancnoc) and Balmenach distilleries as well as Hankey Bannister blended Scotch brand. Unfortunately the fill level is pretty low on this one. I hope is not totally oxidized like the Passport Scotch I tasted a couple days ago.

Nose: Lemon juice, acetone and sunflower seed oil. Medicinal but not with peat or iodine. Mostly antiseptics, gauze pads and ethyl alcohol. Synthetic grease and WD40. Not very pleasant at all and not so promising either.

Finish: Mostly alcohol burn and unfortunately nothing else.

Overall: Wow, that happened... It tastes like a cheap vodka with half of a lemon squeezed in. It's bitter, hot and mostly taste like lemon dishwashing soap. I definitely wasn't expecting a good whisky but also wasn't quite ready for something that bad. Not the best finale but my adventure with three blended Scotch whisky samples form 1970s ends here. Thanks again to The Malt Impostor for all three bottles... It was a blast..! 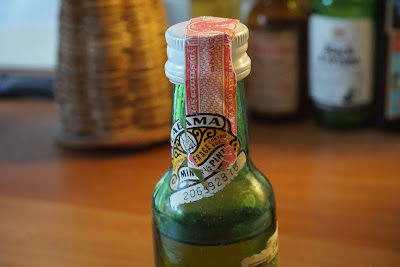