on October 28, 2010
In my childhood I was a hopeless comic book addict. Like any other kid in Turkey in seventies I grew up mostly with Italian comic books and I was obsessed with every single of them. It was before American comic culture arrived Turkey in early eighties. I remember spending every penny of my pocket money on Fridays after I got out of the school on new issues and bringing them home hidden under my school uniform jacket. It was so damn hard to keep up with my little money. After I got little older and more selective I started to be interested more in Belgian and French comic books and to focus on certain characters like Luc Orient, Mister No, Ken Parker, Bruno Brazil and Martin Mystere as well as European illustrators like Eddy Paape, Sergio Bonelli, Greg and Enki Bilal. I think I am mostly rehabilitated right now but from time to time when I am in Europe especially in Belgium and France I love to discover little comic book shops hidden in small alleys or arcades and loose track of time. I still have a huge weakness but at least I can manage it by myself... 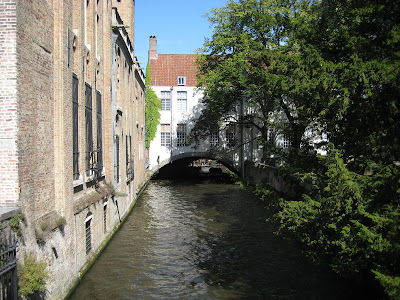 When we woke up that morning the sun was already up high and shining bright in Brussels. It was our day off and we were dying to get out of the city. Like we planned carefully the day before we took the train and arrived Bruges in an hour to blend in with hordes of British tourists. 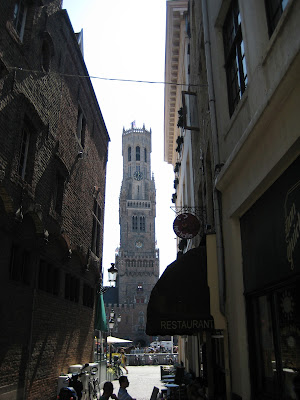 Bruges is a touristic, well preserved and typical Flemish medieval town with tons of churches, towers, canals and fortresses to see but when you are in a city for a few hours in a gorgeous day you don't want to spend your time indoors visiting museums, etc. So we walked around the old city, visited all the shops on narrow streets, browsed flea markets and after some time we sat down for a quick lunch in the first restaurant we could find a table on one of the crowded squares. During our lunch when the staff was steadily trying to rush us out to get new customers in we ended up also watching a weird horse drawn carriage parade with people in period costumes. I still couldn't figure out what it was all about but it was fun to watch. After the lunch we were pretty lucky to find the famous beer shop 2be and taste some beer in their bar sitting next to the canal before we continue our aimless walk. 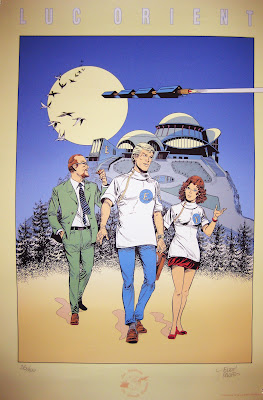 Some time later I discovered the little comics shop De Striep Bruges at Katelijnestraat 42. I walked in right away and started to browse their collection. I was planning just to have some fun and leave but when I climbed up the stairs to the second floor where they were keeping the posters I found an amazing Luc Orient print, numbered and hand signed by Eddy Paape..! I literally gasped out loud like a little kid embarrassing myself... A dream comes true..! I am so glad that I didn't see something like this when I was twelve years old. I could probably loose my mind while trying to convince my parents to buy it.

In the drawing Luc was shown together with his mentor professor Hugo Kala and his girlfriend Lora walking down from "Eurocristal" laboratory. It was so beautiful... As soon as possible I found somebody to help me trying to hide my excitement and brought him upstairs. Fortunately the print wasn't as expensive as I thought it's going to be. I bought it immediately and with the help of my luck somehow I managed to bring it back in good shape in my luggage. Now the print is on my wall above my desk and it makes me smile and feel good every time I look at it. 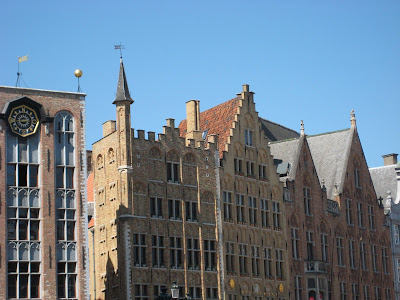