on March 28, 2011
Is it going to get warmer at all this year? We are almost in April and it is still in twenties and thirties... I think I am getting restless for warmer spring days, aimless walks, barbecues, drinking and dining outside under the sun in New York before I hit the road again in May. I hate missing the spring in the city but I have to say I have a long touring period with amazing destinations ahead. So, it's not fair to complain a lot...

This cold and wintery March kept me at home a little more than usual needless to say. I can see it from my growing whisky cabinet... Here are two new additions: 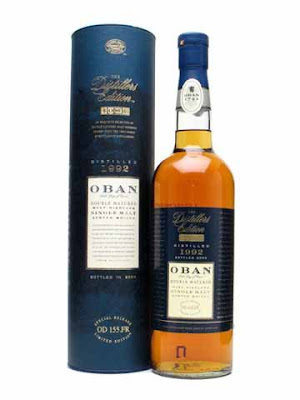 Oban Distillers Edition 1995 (43.0%): This is the second Distiller's Edition of Diageo I am writing about after Caol Ila 1996 which I liked very much. Oban has never been whisky enthusiasts' favorite distillery but it was always kind of special for me. Oban 14 with Laphroaig 10 was one of the first single malts which started my whisky obsession years ago in Istanbul. So I am pretty excited about this bottle. It is distilled in 1995 and bottled in 2009 after getting finished in ex Montilla Fino Casks. Color: Dark copper, clear chestnut honey. Nose: Sweet raisins, Zante currants, sultana cookies, orange jam right at the beginning. Mild briny sea breeze I would expect more from Oban at the first place follows a little after. Palate: As sweet as it can get. This is a sherry blast in your face. Anything you can expect from an over-sherried dram, sweet, rich and thick. Raisins again, crushed grapes, vine leaves are covering the mouth at the first place. Malt, dark chocolate, nutty tones and very enjoyable apricot notes comes after as a second wave. Sherry influence covers the salty and mellow peaty character of Oban a little too much I think. Finish: Here we go... The sweet sourness from Fino leaves with a little salt on the tongue, some spice and also olives. Those olives made my day. Very long... I liked it. Overall: I have mixed feelings about this dram. It is a really nice sherry finish but I think I couldn't see it coming and got caught a little unprepared. No doubt Oban and Fino go fine together but I think I would like to have a little more salt and peat. I am not disappointed at all but I will need some time to get used to it. Another good cigar or after dinner dram I have to say. 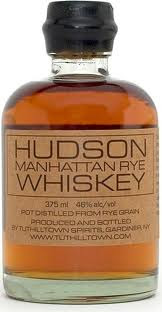 Hudson Manhattan Rye Whiskey Batch 5 (46.0%): This is the bottle I brought back from the distillery last week. After I realized that there won't be any new release of my favorite 100% wheat whiskey in near future I came home with a bottle of Manhattan Rye. Color: Dark golden brown. Nose: Partially burnt wood, camp fire, ash, resin, roasted pine nuts... Like wandering in an eastern spice bazaar. Imagine finding an old wool blanket of your grandparents in the attic. Awesome..! I can nose this for hours. Palate: You can taste how young the spirit is and how small the barrel was. New, light charred oak barrel is everywhere, covering your mouth with ash and amazing mixture of spices: black pepper, cinnamon, cloves, nutmeg, allspice and garam masala. Did I taste juniper berries? Finish: A long never ending finish watching all the spices I listed before leaving your mouth one by one. Pepper stays the longest. Overall: It is definitely not a whiskey for everyone. A little too much on the spicy side and actually that's why I liked it so much. I cannot wait to enjoy it after smoky garden barbecues this summer. It fits perfect to the new American food movement. Very contemporary, organic, local and traditional American at the same time... It has the same feeling like watching True Grit of Coen brothers or shopping from your local farmer's market. Somehow it feels right despite the price tag. Anyway, what can I say? Money well spent...