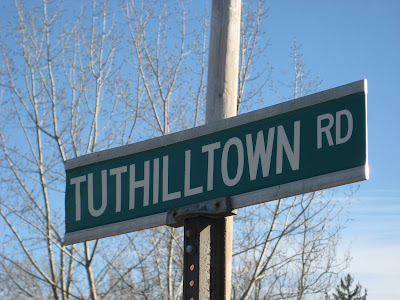 To be honest I wasn't expecting when we decided to pay a second visit to Tuthilltown Distillery using the Friday of our four day long weekend that it will be one of the most beautiful days of this year to ride the train along Hudson River. It was almost 75 degrees, sun was shining like never did for four months and the cool breeze was hitting our faces like we were in the middle of distant mountains. It was hard to believe that I was at the Grand Central a few hours ago trying to find my way to our track among thousands of people rushing to their offices. 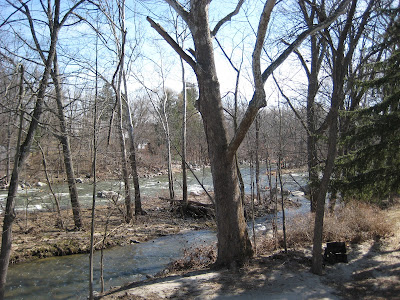 I was up there last June and had an amazing day while they were in the middle of the transition state William Grant &amp; Sons taking over their Hudson Whiskey range. Since that time they purchased a new still, moved their bottling room to next door to a bigger place to deal with the higher output, changed their washbacks and rearranged their product line. 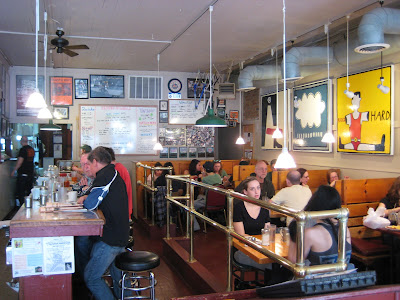 So, I thought it was the time to visit the distillery again. Metro North brought us to Poughkeepsie after a gorgeous trip along the river where we took a cab to New Paltz passing all the vineyards and wineries along the road to get a breakfast before we head to Tuthilltown. In New Paltz we discovered Main Street Bistro which is a Williamsburg style diner, all time crowded with hipsters and college students. Despite their style and look actually the food was great. If you happen to plan a trip to the distillery I would strongly recommend to stop by and check their menu if you don't mind waiting in line for a few minutes when they are arranging a table for you. After filling our stomachs we spent an hour in the city browsing local shops and bookstores and we departed to the distillery. 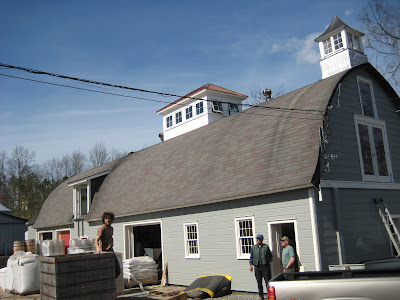 The first big change you notice right away at the entrance is the new restaurant housed in the old grist mill with an outdoor patio. We made our way directly to the tasting room deciding to visit the restaurant later. I actually thought that the distillery was looking almost the same at the first sight or maybe I was expecting bigger changes. I think changes in bigger scale are still on their way in the future but it looks like  distilling and construction are going on at the same time on the site. It always looked hectic there, in a good way... It was like that last June, too but they seem busier than ever. Everybody is in a hurry, looks like working continuously all day long. You feel kind of guilty when you are walking around them. They stop for a second, let you go, smile at you and go back to work. I had the same warm and welcoming feeling I experienced last June. It's good to see that that feeling is not fading out in time when their size of operation gets bigger and bigger. 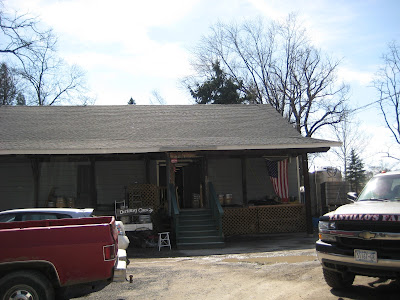 So, after their deal with William Grant &amp; Son some stuff changed. They don't have any distillery only and small batch products anymore. Goodbye to 100% wheat New York Whiskey which was my favorite and no more single malt whiskey, at least for a while till W. G. &amp; Son thinks it's the time for them. Their rum expression changed the bottle and the name so it doesn't look like in the Hudson Whiskey range. They teamed up with the "Huguenot Historical Society of New Paltz" for this new release. It will be called Roggen's Rum and sold in 750ml bottles. It's an incredibly smooth aged sipping rum. Their Hudson Whiskey line-up is limited to New York Corn Whiskey, Manhattan Rye Whiskey, Baby Bourbon and Four Grain Bourbon. Tasting on site didn't change my mind. Among their core range the winner for me was always Manhattan Rye and the runner-up was Four Grain Bourbon. So, I am coming home with a bottle of Manhattan Rye. By the way even if I am not into unaged spirits I have to say that their corn whiskey is the only white dog I can imagine myself sipping over a cube of ice and also their Heart of Hudson double distilled apple vodka was a nice and impressive surprise for me. Pretty nice apple taste along the palate and aftertaste was very distinct. I'll leave all the tasting notes for a later post. I also admit that we couldn't help purchasing a bottle of whiskey barrel aged maple syrup from the shop... I am pretty excited to taste it. 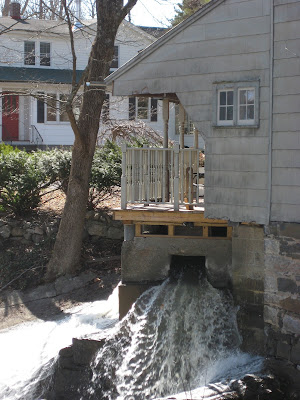 After the tasting they were nice enough to let us see their new still during a busy work day. It is an absolute beauty. Because it is way taller than the old ones they had to carve out a hole in the ceiling and add an elevated sky-light to make it fit in the old still room. It looks gorgeous in there with it's shiny copper body. After the small tour we stopped by for a glass of white wine to celebrate the coming spring in the Grist Mill which also turned out to be a mini tasting of all the local wines of Tuthilltown. After choosing our wines we stepped out to the patio with our glasses to chill under the sun, watch the river flow by and listen to the waterfall passing through the mill. I could easily spend hours there. Since I know now I think next time I will make time for a nice, long and lazy lunch and/or dinner in the restaurant. I cannot wait, maybe in Summer... 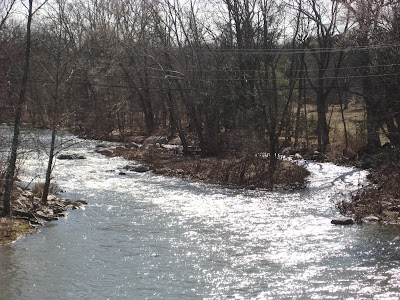