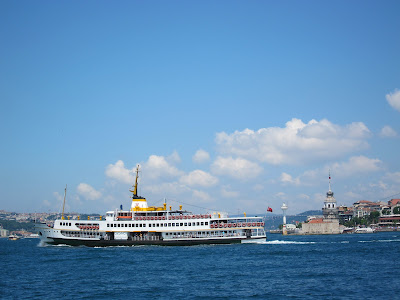 Actually I think we were about to give up all our hopes of catching the boat on time. It was a sizzling hot afternoon in Istanbul, we were stuck in a cab in dense traffic and getting a little frustrated with the whole situation. As soon as we spotted the ship restless at the piers at a distance getting ready to leave we jumped out of the cab, ran across the street, managed also to buy two bottles of ice cold water and caught the boat just in time. Literally seconds after we got in the boat left the dock. 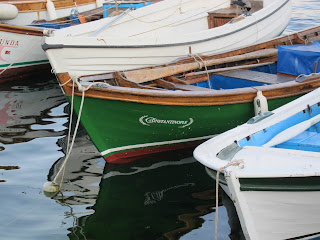 We planned to spend a day in Burgazada with one of my best friends months ago before I left NYC and since then I was waiting for this day like an eager child. Right after the boat took the turn on Bosphorus and got en route to Princes' Islands the breeze coming from the sea filled the clearance we were standing and cooled everything down. The smell of the sea filled my lungs and the noise of the city faded away in minutes. We decided to stand right there where we were able to see both sides and started to watch young lovers kissing, kids running around driving their parents crazy and seagulls flying next to the boat and catching bread pieces in the air people were throwing towards them. 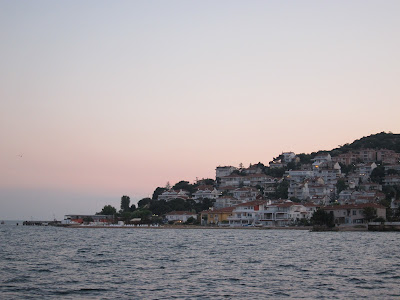 Princes' Islands is an archipelago consisting of nine islands off the coast of Istanbul. Buyukada, Heybeliada, Burgazada and Kinaliada are the bigest ones with a decent size of settlement on them and the other five have a few inhabitants or are totally remote either owned privately or by the government. Throughout all my childhood these islands were known of hosting the summer houses of the Christian and Jewish population of Istanbul. I remember going to day trips with my mother to visit her friends there. Also artists, musicians and writers were taking advantage of the solitude of the islands by renting those houses for cheap during the winter months. It was one of my teenager dreams spending a good portion of my life on one of the islands to become a writer like Sait Faik Abasiyanik who was one of my idols lived in Burgazada for most of his life. Of course I didn't even come close... Now I have been told that unfortunately the islands are getting more and more trendy, attracting the hipsters and raising the real estate market which is a concern for the locals and regular visitors. 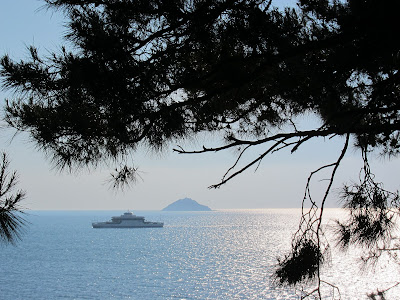 We arrived Burgazada after a 45 min absolutely beautiful boat ride. Although we had a reservation for one of the restaurants facing the pier we decided to try our chance to find a table in one of the famous spots of the island. Kalpazankaya is on the other side of the islands and if you are not in a mood of a long hike the only way to get there is taking one of the coaches on the island. Motorized cars are not allowed on any of the islands except a few ones owned by the city like trash collectors, ambulances or police cars. After a twenty minutes trip with a horse drawn carriage climbing up to the southwest hill of the Burgazada we reached the restaurant and luckily scored a table for two with a decent view. 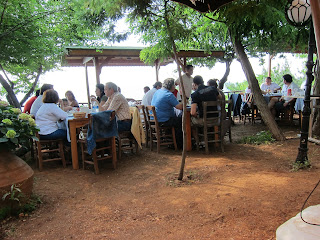 The restaurant has scattered simple wooden tables with plastic covers on them all around the slope of the hill towards the sea and nothing looks extra fancy. The amazing view of the Sea of Marmara with the afternoon sun slowly coming down at the horizon was breathtaking. And needless to say the food and raki..! When we walked up to the kitchen to choose our fish and mezes we spotted a "Kofana" a large bluefish in the refrigerator. Kofana became very very rare in Istanbul in last years and to be honest I don't remember when I had the chance to eat one last time. In the last decade every year the fishermen used to hunt the bluefish in masses and didn't allow them to grow bigger. Lately the government is taking the fishing bann more seriously and I think we are seeing the results. Anyway the choice was made and we ordered the Kofana, some mezes and half a bottle of raki. Every dish was very well executed in a very simple way and we had an amazing late lunch/early dinner there. The restaurant is a little bit on the pricy side but after coming all the way there and having that kind of food in front of the amazing view you don't complain about it too much. 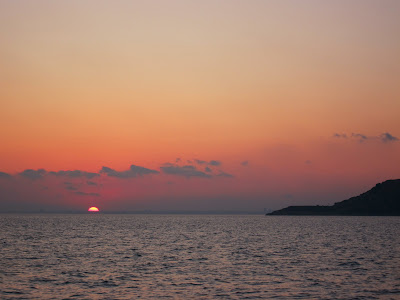 The boat ride back to the city was magical. We were happy, exhausted and also a little bit tipsy. On our way we watched in total silence the sun go down, the teenagers singing songs all together in joy half drunk, lovers sleeping in each others arms. Istanbul was reminding me how magical and beautiful she can be. I felt a little embarrassed of having cursed her earlier in the day when we were struggling in the traffic. She was more beautiful than ever...