the Overlook Hotel here has somethin' almost like "shining"...*

on June 13, 2011
Here I am again, in Woodstock, NY. I was planning for a long time to come back here and climb another mountain before we continue our tour next week. It has been almost a year since I hiked Mount Tremper and this time I was ready to climb to the Overlook Mountain summit (3,140 ft.). Overlook Mountain is located north of the City of Woodstock and can be seen from the city clearly. It's summit trail is one of the most popular trails in Catskills. 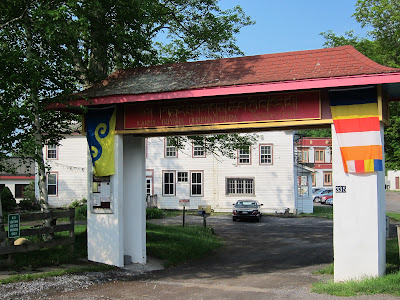 Actually the trailhead begins at the parking place opposite the Karma Triyana Dharmachakra Tibetian Buddhist Monastery at about 1,800 ft. which can be easily reached with your car. Because I felt like I am cheating I decided to start in the city and spent most of my energy and lost precious cool time early in the morning climbing the steep tarmac Meads Mountain Road to reach the parking lot. Don't ever try it... It is pretty boring unless you are interested in real estate. Even if you are you can do it when you are coming down. Needless to say I was already exhausted and had to take a break before I even started the real summit trail. Right after you start the real hike you locate the the kiosk and the log book at your left side like in every trail of Catskill State Park. When you are done with registering you can start to follow the familiar red trail marks on the trees. The trail follows the fire and TV/cell tower maintenance road along with the power line posts. To be honest it is not exciting at all at the beginning to follow a well maintained wide gravel road with a monotonous but pretty steep ascent. You climb around 520 ft. pre mile rise. Both sides of the road are surrounded by dense woods and basically you don't see anything except chipmunks taking the scene from squirrels with the rising altitude. 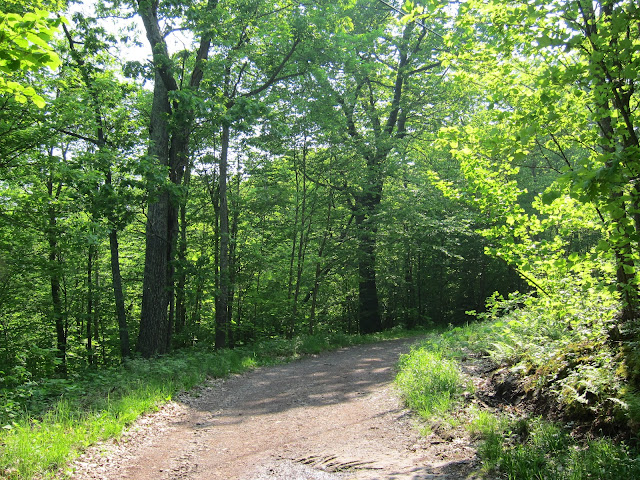 After 40 minutes of tiring and kind of boring hike suddenly you feel the backdrop behind the woods at both sides changing. Black fades to blue and green at your left side and you start to see Indian Head Mountain and the rest of the Devil's Path Mountains. I am sure it looks much better in winter without all the green leaves and branches blocking your view but even with that change the hike starts to be much more exciting and uplifting. After ten more minutes one of the most rewarding sights of your hike appear right on top of the hill the trail is leading to. 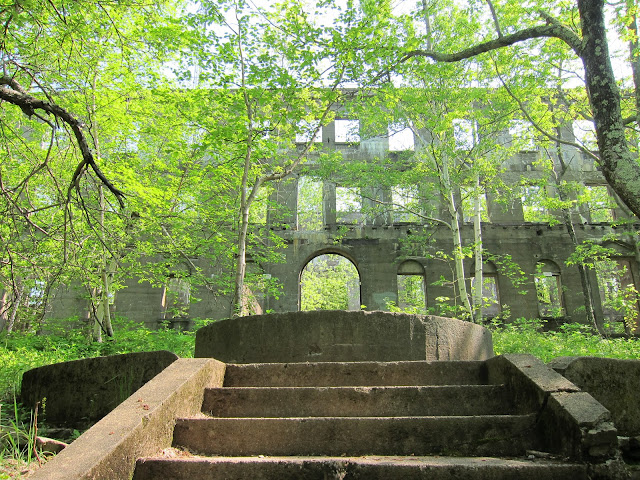 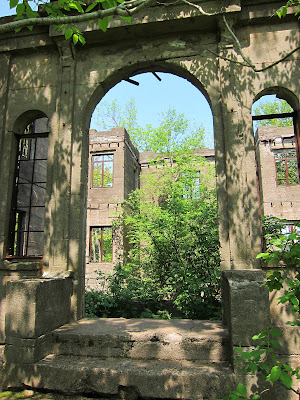 The ruins of Overlook Mountain House rise in their most haunted and cryptic look in front of you. Breathtaking... I couldn't move for some time and just stared at them with my mouth open before I came back to my senses and dared to approach closer. I knew about the ruins and was thinking that they should be nearby for the last twenty minutes but definitely didn't expect something like this. Only four outer walls and main staircases of the hotel and the nearby lodge are visible and they are blurred and blended in the forest. The Overlook Mountain House has a totally cursed story. It opened in 1871 on the site of the first mountain house built in 1833 but burned down completely in 1875. It was reconstructed in 1878, burned again in 1924. In 1928 the new owners built the new building which we can see the ruins of today but had to abandon the project when the stock market crashed in 1929 just before the opening. I also wonder if it is a total coincidence or not Stephen King choosing the name of the hotel in The Shining as "Overlook Hotel". There is no other connection than it's name that I know of but I still couldn't help thinking about Jack Torrance and room 237 all the time when I was on site. It's amazing how the forest claimed back the real estate stolen from it. Huge trees and vines totally took over the roofless ruins. Because of falling debris the area is totally unsafe and labeled strictly as a forbidden zone but it is almost impossible to keep yourself out. I had to enter... It's absolutely magical... 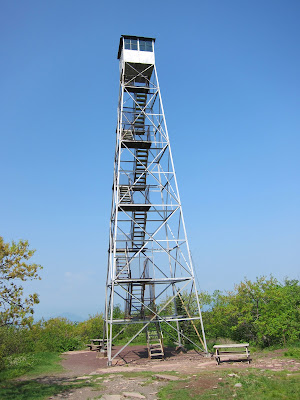 If you can convince yourself to move on the trail continues passing the newly erected TV and cell tower towards the summit. Finally the trail becomes like a real mountain hiking trail, narrow and kind of messy. Shortly after that you see the junction with the trail leading to Echo Lake and Indian Head Mountain. You want to continue the summit trail towards your right. The light changes, it gets brighter around, the trees become less tall, flies and bees are everywhere. Everything indicates how close you are to the summit. Another 15 minutes and you arrive to the wooden cottage used by the volunteers and the fire tower at 3,140 ft.. During summer weekends the cab of the tower is open for the visitors and you can take the guided tour but since I was climbing on a Wednesday to avoid the crowd I couldn't get into the cab. I could climb the highest flight of the steps of the tower though. 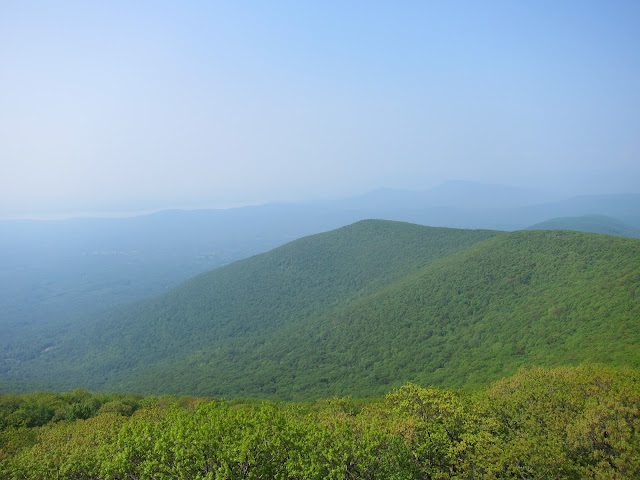 So, this is why you were suffering for two hours... It is the most amazing view you can ever see in Upstate New York anywhere. A view to cry for... On a clear day I have been told that you can see six states from the fire tower: New York, Connecticut, Vermont, Massachusetts, New Jersey and Pennsylvania. I am not the best person to be able to name the states from there and the view wasn't that clear because the storm was approaching but I could identify the City of Woodstock, Hudson River, Ashokan Reservoir and countless Catskills summits. It was absolutely fantastic... I couldn't decide how to enjoy the view. I spent almost 45 minutes there taking photographs, sitting down and watching, taking notes and trying to figure out things I could see far away. 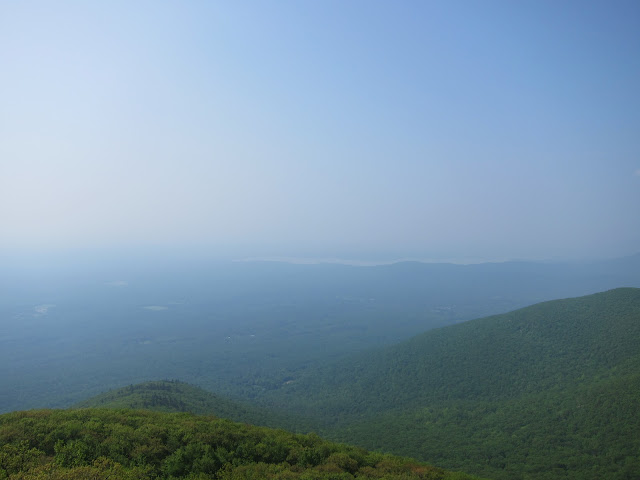 The trail has one last important step you shouldn't miss. A narrow path continues behind the cottage to a more private and less known point called Eagle's Cliff which is named after an American Indian legend. The cliffs are pretty dangerous there and you should be really careful to come close to the edge. The view is amazing again. You can also see all the visitors' names inscribed on the floor for years. Some of them were from 1910's. 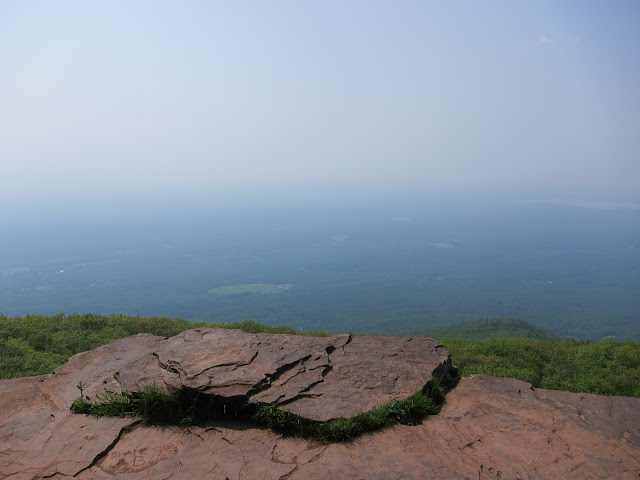 The trail ends there. You follow the same way to go back to the parking lot. Almost sixty percent of the trail is pretty boring but the end of the hike is totally worth it. The ruins of the Overlook Mountain House and the view from the fire tower makes the hike very special. I would like to thank actually again to Appalachian Mountain Club and Peter W. Kick for the books Catskill Mountain Guide and AMC's Best Day Hikes in the Catskills & Hudson Valley which prepared me amazingly good for my hike. If you are planning to hike in Catskills you should definitely own at least one of those books. Overlook Mountain summit trail is highly recommended to anybody who is ok to suffer a little in the beginning to be rewarded at the end. You won't be disappointed.