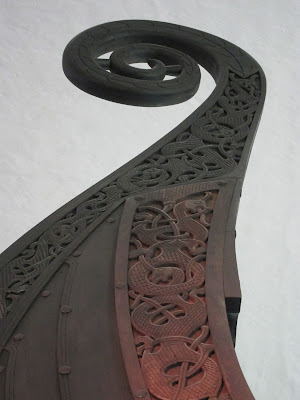 When I was waiting for Chris at the hotel lobby last Sunday it was raining in Oslo and the temperature was in low fifties but instead of complaining about I was kind of enjoying it after leaving NYC melted in a heat wave. Right when I was trying to figure out how to recognize him since we didn't see each other before somebody rushed in the lobby with a J&B umbrella and there I realized that I had a good night ahead of me...

When the dates of my Oslo visit got settled for August I started to look for some whisky related events and whisky bars in Oslo online and the first hit was Oslo Whisky Festival which to be honest I didn't hear before. But when I went to their web site I realized actually the dates of the Festival were pretty close to the dates of our visit in November... All I needed was to arrive Oslo a few days earlier. I got pretty excited about the possibility to be able to attend it and sent an email to the address I found on the site. Chris Maile who is the founder of the Oslo Whisky Festival replied immediately with great kindliness. We talked the details about how to participate in the Festival and I also asked him which bars to visit in the city during my short stay in August. Instead of sending me some suggestions he amazingly offered to get together and have a look at them.


Chris is a Scotsman from Skye living in Norway for twenty-two years. He is a whisky consultant, taster and enthusiast. He founded the Festival eight years ago it's getting bigger every year. We visited together three different amazing whisky bars that night. I didn't know that Oslo was so much into whisky. Unfortunately our first stop Whisky Bar was closed since it was a Sunday night but we caught the owner next door in a pub and he was kind enough to allow me to peak around his bar. I took a note to visit the place the night after and we moved to our second stop, Underbar. Underbar has a great collection of rare and limited expressions as well as old general releases which are nowhere to find right now. There we had our first dram of the night, a cracking 11yo Glengoyne I reviewed below. From there we continued to Doktor Jekylls Pub which is another serious whisky bar with two floors filled with countless bottles. I literally spent at least half an hour just staring at the shelves. Other two whiskies I reviewed below are from Dr. Jekylls inventory.

I have to say it was one of the best whisky nights I had for a long time. Three hours of great whisky talk, three outstanding whisky bars, three amazing drams... I cannot wait to visit Oslo Whisky Festival November 4th and 5th and chat more with Chris. I would like to thank to him once more from here for his great hospitality. 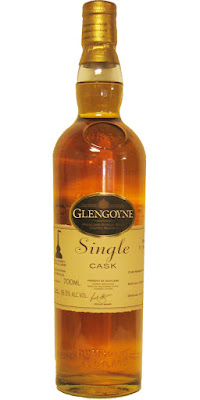 Glengoyne Single Cask 11yo "Oslo Whisky Festival 2008" Ltd. Ed. (56.5%): So, this is a bottle Chris is very proud of. He chose the cask by himself for his Festival in 2008 and the whisky scored 95 points in Jim Murray's Whisky Bible 2011. He told me that it is the highest score Glengoyne ever got from Jim Murray. Pretty exciting introduction, isn't it? The whisky is distilled in 1997 and bottled in 2008 from cask number 2725 exclusively for Oslo Whisky Festival. Only 339 bottles got released and I believe we were drinking one of the last surviving ones. Color: Hay like. Crystal clear and bright golden. Nose: Lovely first fill bourbon cask notes. Wet malt, pineapple, vanilla and lemon peel. It's a whisky I can nose for hours. Palate: Oily, thick and sweet barley juice. Amazing dram... A few drops of water let it explode. Custard, lemon meringue, honeysuckle. Oak is embedded like it would do in a Burgundy Chardonnay. Grassy and floral. Finish: Long, malty and slightly spicy. It leaves an oily coat under your tongue. Absolutely delicious. Overall: Wow... I have been warned in advance but didn't expect this much. This is an exceptional cask. Kudos to Chris and Oslo Whisky Festival. It is a reason by itself to visit the Festival coming November. It reminded me a little bit Cadenhead's 17yo Bladnoch I reviewed two months ago. I start falling more and more for first fill bourbon casks I think. 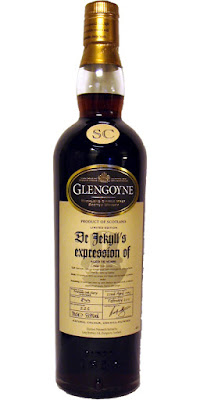 Glengoyne Single Cask 16yo "Dr. Jekyll's Expression of" Ltd. Ed. (53.9%): When we walked in Doktor Jekylls Pub I have been told that they have their own Glengoyne expression, too. How cool is that? This one is distilled in 1993 and spent it's life in a sherry hogshead numbered 899 till they bottled it in 2010. Only 226 bottles were launched. Color: Dark reddish brown. Almost like a ripe red plum. When you hold the glass up to the light you can see the red color clearly. Nose: Toasted almonds, dark toffee and honey. Spiced, sweet, dark caribbean rum, raisins and prunes. Molasses. Palate: If I didn't see the dram getting poured nobody could convince me that it isn't a rum finish. I got all the notes I can possibly get from a heavily rum finished whisky. Very sweet dried fruits, dried dates and ripe damson plums. Nutmeg, anise, cinnamon. Sweetness dried out my mouth completely. Definitely needs water to cut it. Finish: Long. I got oak notes for the first time. Dried fruits stealing the scene at every step but I could also taste a little bit of licorice here. Overall: It is a good whisky, no doubt about it but a little bit too sherried for me. I couldn't even think to have a second glass probably. All the sweet sherry notes clouding the core spirit a little too much. I like finishes where I can still taste the whisky itself I guess. I have to admit a spicy cigar at winter would be good with it though. 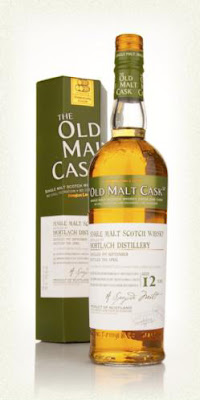 Douglas Laing & Co. Ltd. Old Malt Cask Mortlach 12yo (50%): This Mortlach was the last dram of the night for me. I always enjoy tasting Mortlach from different independent bottlers and I couldn't resist when I saw the bottle on the shelf. It is distilled in 1997 and bottled in 2009. 365 bottles were made available. Color: Clean golden amber. Nose: Petit beurre biscuits, liquid toffee, butterscotch, fresh out of the oven carrot cake. Smells like a bakery. Palate: Definitely a good choice to end the night. Pumpkin spice cake and sticky toffee pudding. Vanilla, cinnamon, ginger and cloves. Sugar cookies. Finish: Medium long. Vanilla and toffee lingers the most. Overall: It's a pretty good whisky with right amount of sweetness. Nothing exciting or extraordinary about it but I would like to have it in my whisky cabinet. It is tasty and not over-sherried. It made me curious about the other Mortlach casks released from Douglas Laing. There are so many of them.
bar/pub glengoyne highlands independent bottlers mortlach old malt cask oslo scotch whisky single malt speyside travel whisk(e)y
Location: Storgata 28A, 0184 Oslo, Norway