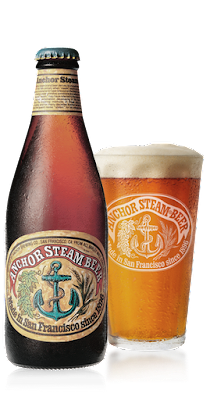 Anchor Steam Beer (4.9%): It is not a secret that I have a soft spot for Anchor Steam. Definitely my favorite everyday brew... This is the beer I am comparing others to when I am tasting different expressions from different breweries. It is made from hundred percent malted barley and comes in uniquely shaped 12oz bottles. I wish that they would give the abv info on the label though. Look: Bright copper, shines in a beautiful orange color. Very satisfying slowly dissolving off-white head. Nose: Malty and grassy. Full with hoppy and spicy aromas and distant flower honey notes at the background. The nose shows the all barley malt mash. Palate: Spices hit first. Even I know that this beer is made of 100% malted barley the spiciness suggest rye and unmalted barley somehow. Barley takes over very quick. I taste also bananas, butter and bread crust. Overall: Classic... I think Anchor Steam is one of the best widely distributed beers in the States. You can find it almost everywhere, it tastes damn good and suits almost every season. Perfect six pack to keep in your refrigerator just in case. Highly recommended...

Dogfish Head 60 Minute IPA (6.0%): The story of Dogfish Head starts in 1995 in Delaware as a brewpub. With the growing popularity of their pub and beer first they expanded the capacity of their brewery, then built a brand new one, extended their range and started to export first to East Coast states and then nationwide. I first had their beer four or five years ago and became a fan since then. 60 Minute IPA gets it's name from a unique process called continuously hopping which includes 60 hop additions over a 60 minute boil. Look: Dark amber color with a thick slightly off-white head which sticks almost for a minute before it dissolves. Nose: A feast of hops, pine cones and roasted malt. Slightly citrusy and grassy undertones. Palate: Much more citrusy than the nose suggested. Very awakening and crisp with bergamot and grapefruit notes. Hops take the scene towards the end. It finishes bitter, hoppy and spicy. Overall: A true winner..! Amazingly balanced beer between citrusy and hoppy sides. Perfect for the Fall ahead of us. Good with barbecue, spicy Asian salads, sharp cheeses, grilled fatty fish and grilled shrimps. Great to introduce to people who think that they don't like IPA's. Highly recommended. 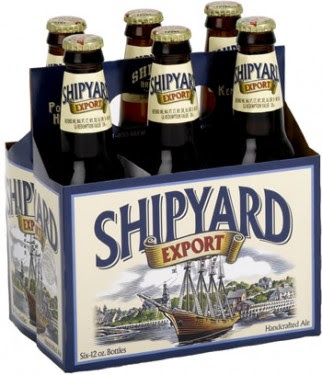 Shipyard Export Ale (5.0%): Shipyard is a small artisan brewery from Maine. To be honest I didn't have any idea about them before I saw their Export Ale expression on a menu in Sarasota, Florida. Being from Maine is a good reputation for a beer to start with, so I ordered it. Look: Shiny deep golden color with a very refreshing look. The head is weak and thin and disappears to a film in seconds. Nose: Not too much going on here. Still has a fresh feeling with buttery pastry notes. Also some stainless steel containers and a little bit dark garden turf. Palate: Grassy and earthy. Metal notes I got from the nose are also present at the palate but not in a pleasant way this time. I enjoyed the earthiness and moist dark soil notes though. Pretty dry finish. Overall: I definitely didn't go crazy about it but it is a very easy drinking refreshing summer ale. Pairs good with any kind of seafood especially with shellfish. Give it a try...
ale anchor brewing beer beer/wine dogfish head ipa shipyard