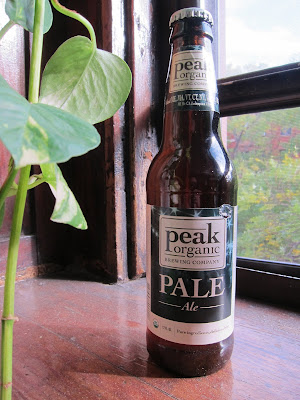 Peak Pale Ale (5.1%): This is the second Peak Organic brew I will talk about on the blog after reviewing Fall Summit Ale last month. Pale Ale is the flagship beer of Peak Organic Brewing Company from Portland, Maine. Unfortunately I will be tasting it poured from a 12oz. bottle instead of from tab. Look: Cloudy orange color with a white firm and thick long lasting head, satisfying look. Nose: Very malty. Some roasted and caramelized undertones with sweet orange and quince aromas. Palate: Nice balance of malt and hops. More bitter than I expected but balanced with citrusy sweetness. Highly carbonated, almost unnatural. Odd stainless steel notes at the finish. Tasted like drinking from a tall boy a little. Overall: I think it is a pretty safe bet for Peak Organic. Not edgy, not risky, a good tasting solid beer made to be liked by everybody. I think I like artisanal breweries taking more risks with their expressions but on the other hand I totally understand the logic behind. Anyway, I would prefer their Fall Summit Ale over their Pale Ale personally but would buy this one if I will be throwing a party. You cannot go wrong, a real crowd pleaser...

Full Sail Pale Ale (5.4%): After Portland, Maine now we are jumping all the way to the opposite side of the country to Portland, Oregon. Full Sail Brewing Co. started to produce their beer in Hood River, Oregon in late 80's right at the beginning of the micro brewery movement boom in the United States and proudly became an independent, employee-owned company in 1999. Pale Ale is a member of Full Sail's core brews line with their Amber Ale and IPA. Look: Crystal clear amber. It shines like polished copper. Very thin head disappearing into almost nothing in seconds. Nose: Very malty and hoppy. Honey and toasted multigrain bread. A little bit of a dive bar on a Sunday smell... Palate: Surprisingly light, crisp and easygoing. Creamy mouth covering feeling with a nice balance of malt and hops. Nothing is overpowering. Low but equal amount of citrus, grain and honey notes. It finishes with a weird sardine can taste that threw me off a tiny bit. Overall: You wouldn't fall in love with this beer but also there is absolutely nothing to complain about. Perfect beer to sip by your own at your neighborhood bar during a lazy summer day when watching a football game on TV. Good companion to your everyday bourbon or to a casual backyard barbecue. I wouldn't buy a six pack to keep home but definitely order at a bar. Goes down dangerously easy, it's masculine and very American, a true American Pale Ale.
ale beer beer/wine full sail pale ale peak organic