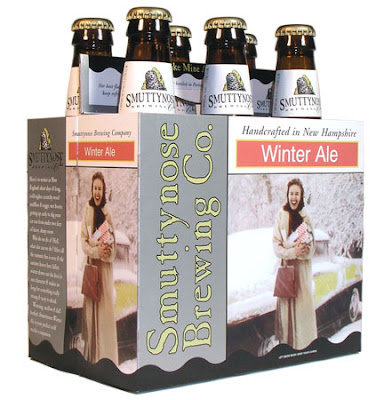 Smuttynose Winter Ale (5.1%): Smuttynose is from Portsmouth, New Hampshire and one of the most successful breweries from the micro-brewery boom of late 90's in the States. To be honest they drew my attention first with their hilarious label designs before I could have a chance to taste their beers. This seasonal expression is available from late October through February and brewed with Trappist ale yeast imported from Belgium. Look: Cloudy and dark brown with a deep red glare. Off white head dissolving to a thin film slowly. Nose: Pear pie, spoiled apples and red berries. Very fruity. Distant roasted malt and coffee aromas. Palate: Thick texture with fresh berry and malted barley notes. Quite an entrance of the Belgian Trappist yeast. Taste of a fruity Belgian ale plus the carbonation. Just enough hoppy. Finishes with strong bitter chocolate notes. Very tasty... Overall: I very much enjoyed this beer but I don't agree it's being a winter beer. I can sip it every season. A very tasty Trappist for America, spot on... 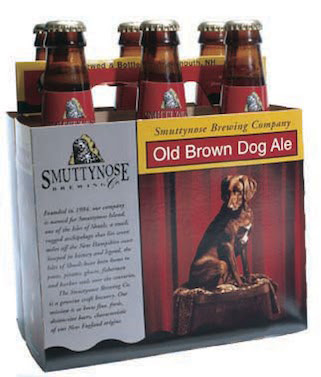 Smuttynose Old Brown Dog Ale (6.5%): This one is a member of the full time line-up of the brewery. It has a higher abv. and has been around since 1988. Smuttynose calls this beer as a classical example of the American Brown Ale. Look: Cloudy very dark copper-brown color with nice, firm, slightly off-white head. Nose: Cherry..! I can nose sweet tannins, vanilla, malt and other red fruits but dominantly cherries. Quite nice... Palate: Very flat. I didn't get the carbonation I was expecting from an American Ale which works for me very nice. The texture and the taste on the tongue reminds me Kriek Lambic. I have a feeling that it might be judged as too sweet by quite a few people. Finish brings roasted malt, some nuttiness and sweet hazelnut chocolate. It leaves a candied sticky coat in your mouth and throat. Not in a bad way though, it keeps the finish longer. Overall: I wouldn't guess this beer as an American beer at a blind tasting. Totally opposite experience than the Winter Ale I tasted above. This time I was expecting an American Ale but ended up with an European style brew. It would pair perfect with thick vegetable stews or salty, heavy cheeses. Definitely will buy again.
ale beer beer/wine smuttynose