on December 17, 2011
St. Peter's is a considerably new brewery from Suffolk, England which is founded in 1996 by John Murphy a branding and marketing professional. They built a good reputation since then by producing a decent range of organic and traditionally crafted beers using local ingredients. Although they release some very good cask ales in UK they are more known internationally with their oval shaped bottled beers. Immediately people fell in love with those hip, brown, old fashioned medicine bottles. To be honest it is also relatively easier to find their beers than any other English Ale in the States. I have two different expressions in front of me today. They both come in pint bottles...

St. Peter's Golden Ale (4.7%): Look: Crystal clear and light golden amber color like a lager with a firm and white head that dissolves very slowly. Visible and busy carbonation. It made me check the label again. Is it an English Ale, really? Nose: Nose delivers distinct pilsner notes. Malty and fresh. Stainless steel tank, fresh cut grass, fennel and lemon zest. To be honest it smells like a German or Czech beer. Palate: The most beautiful European butter and toasted crunchy bread crust notes. Fresh hazelnuts and fresh almonds. Very nice and creamy but not so heavy texture covering the mouth. Towards the end I could taste lightly roasted malt with damp and earthy notes. Long and satisfying finish. Overall: This is a well balanced and flawless beer. It caught me off guard at the beginning. I was expecting a hoppier, flat and darker ale for some reason. It has a fresh and brisk feel but a very complex palate. I have to say butter and bread notes made my day. I wish I discovered it last summer. It would be an amazing afternoon, before dinner summer brew. It makes you not to rush and enjoy every sip. Don't bother to pair it with anything and sip it alone, chilled... 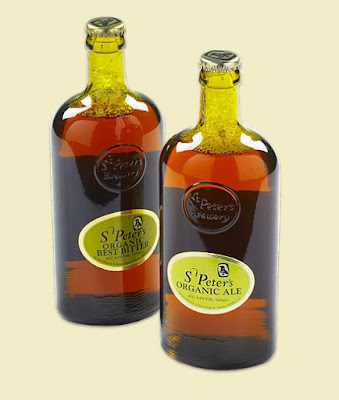 St. Peter's Organic English Ale (4.5%): Look: Again very clear amber color like Golden Ale but a little darker. Very thin head disappears to nothing in seconds. Nose: This one noses like a true English Ale. Hoppy and yeasty with toasted malty aromas and also smells quite bitter. Palate: Wow... Same creamy taste and texture for a starter but right after it delivers beautiful green apple, honey and malty notes covered with mild eastern spices like nutmeg, cardamom, cinnamon and turmeric. Yeasty, grassy and woody with a good amount of vanilla. It reminded me Lowlands Scotch whiskies like Bladnoch and Rosebank. Overall: Definitely my kind of a beer. Sippable, malty and hoppy. A true winner... Don't let it get warm in the glass though. Anyway, I should get some more to keep in the refrigerator.

I am pretty impressed with both beers from St. Peter's brewery I tasted today. I have to admit that I was feeling a little distant at the beginning because of the incredibly hip and over designed image of the brewery but the beer is amazingly good. Highly recommended... I am looking forward to taste different expressions in near future.
ale beer beer/wine st. peter's