Single Cask Nation Arran 12yo (54.8%): The second sample of Single Cask Nation's single cask expressions comes from The Arran Malt, the only distillery on Isle of Arran. The distillery is operating only since 1995 but they have been already an important player in the game with their well executed core line and experimental finishes. The whisky chosen for this bottling is distilled in 1999, spent it's first eight years in a first fill ex-bourbon cask and then transferred to an ex-pinot noir cask for another solid four years. So it's not that much fair to call it a wine finish; it's more like a double matured whisky. The cask is labeled as #6 and bottled at 54.8% abv. Color: Bright and rich like holding a jar of beautiful orange-blossom honey up to the sun. Nose: A little mute in the beginning. Some dried black currants and raspberry marmalade. Then a few drops of water and oh lá lá..! Amazing how water opens it up wide open. Sweet and syrupy. Green fig jam and middle eastern sweets: baklava with home made honey syrup and rice pudding with cinnamon dusting, cloves and mahlab. Palate: It is pretty sweet with a thick texture before adding water: Häagen-Dasz rum raisin ice cream and apple and raisin crumble... Adding water triggers a massive salt explosion. Something you would never guess from the nose... It gave me a tingling and almost numbing sensation on my tongue with sprinkles of coarse sea salt and cracked black and white pepper corns. After the first shock is over the scrapings of a burnt apple skillet pie and warm apple compost notes surface. The whisky carries sweet and salty notes so perfectly nice together it reminds me a superb kanafeh served in a sizzling hot pan soaked in sweet syrup with salty melted cheese filling... Finish: Very very long with olive brine, pepper and sweet sherbet with cloves. Overall: It's a big whisky and a great counterpoint to their Kilchoman release I reviewed in the earlier post. The dried fruit and spice notes you would expect from the pinot noir cask got integrated with the salty core of Arran and sweet notes of ex-bourbon barrel amazingly well due to the long times spent in each cask. Again it is a one of a kind cask with a great personality. 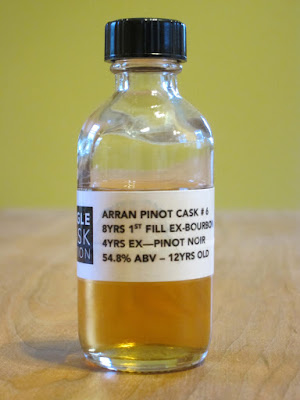 Anonymous said…
Wow that was unusual. I just wrote an really long comment but after I clicked submit
my comment didn't appear. Grrrr... well I'm not writing all that over
again. Anyways, just wanted to say wonderful blog!
Feel free to visit my page - black friday macbook pro
October 2, 2012 at 1:37 AM

Unknown said…
Great review, thanks. I love The Arran malts but haven't got any open at the moment so I might get tempted to try one of their different cask finishes. I can recommend the icons of Arran "The Rowan Tree" and "The Eagle" as well as the 10yo and 14yo. Unfortunately they were so drinkable I haven't got any left... :-)
I think the Madeira finish will be my next one...
October 2, 2012 at 5:27 AM

Bozkurt "bozzy" Karasu said…
Thanks for your comment and tips... I am a big fan of Arran Single Cask Bourbon and recently tasted and loved Arran Amarone Cask, strongly recommended. Didn't taste The Eagle though, but I will..!
October 2, 2012 at 5:30 AM