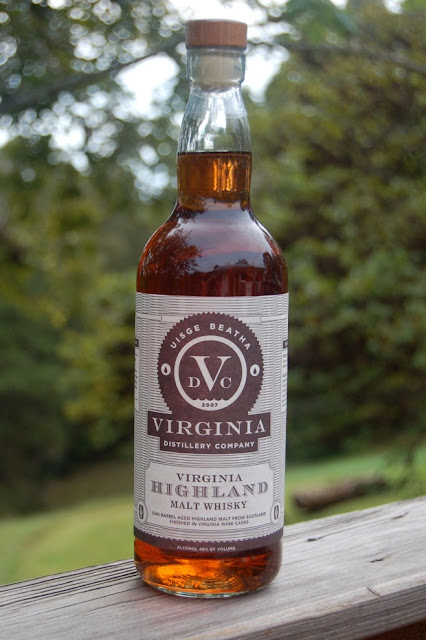 Virginia Highland Malt Whisky (46.0%): You will remember me talking about Virginia Distillery Company in one of my very early posts. They are the folks who saved the original Scottish pot stills of the Turkish whisky "Ankara" and brought them to the new world to produce their very own single malt whisky in the State of Virginia. As everybody knows new distilleries have to make money somehow before they introduce their product. But unlike many others Virginia Distillery didn't have a chance to distill vodka or gin because of their choice of stills and also didn't want to build a business plan relying on bottling their new make or under-matured whisky. Instead they first imported blended malt scotch whiskies under the label Eades Double Malt Whisky and then this year they started with their own finishing experiments by releasing a new expression called Virginia Highland Malt Whisky. The whisky is again a blended malt imported directly from Scotland but this time finished for an additional period on the US soil in French oak, ex port-style wine barrels sourced from a vineyard few miles from the distillery. It's a pretty clever move to create the necessary early income and at the same time to gain an invaluable experience on different cask finishes and maturation techniques which will help them immensely in near future when they start to fill the barrels with their own spirit. I have to give them the credit here to be very "patient" on their path as a new distillery which in my book the most important quality lacking in American craft distillery movement nowadays. Color: Reddish, dark amber. Shines like a fine aged cognac. Nose: Unripe and sour blueberries and blackberries. Poached quinces and green apple compost. Chewed cigar butt, sumac and cooked zante currants. Adding a few drops of water shifts the nose to the sweeter side. Palate: Berries are dominant on the palate as well but now lighter in color and sweeter like raspberries and strawberries. Orange peel jam, clover honey, warm oatmeal raisin cookies and some cinnamon dusting. Water erases hints of alcohol burn on the tongue and smoothens the palate nicely. Finish:  Ongoing sweet burn of warm orange-cardamom baklava syrup. Definitely longer than I expected and also quite peppery. Overall: If this whisky is giving us a hint of what they would like to see in their own whisky I am more excited than before. It's a chewy, bold and flavorful dram. A well chosen vat and very successfully executed finish which could go easily wrong due to the very active French Oak barrels and the climate of Bardstown, Kentucky where the whisky is matured. Looking forward to visit the distillery when they start with the operation. Many thanks to Pat Jones-McGray for the official sample. 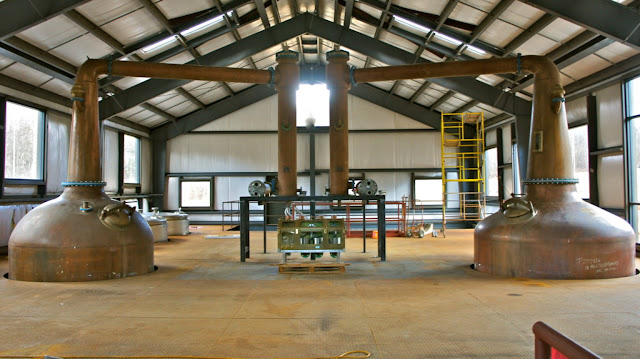