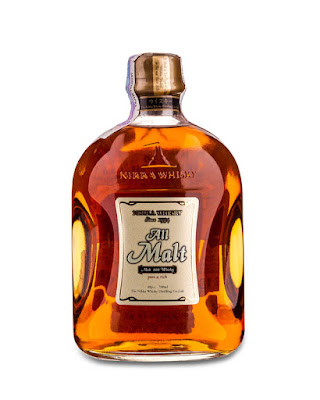 Nikka All Malt (40.0%): I am taking a break of the blend project today and reviewing a blended malt from Nikka. It is a blend of whiskies distilled in two different distilleries owned by Yoichi Company one using traditional pot stills and the other one coffey stills. Basically it is a dram which could be easily Scotch Whisky Association's nightmare if somebody would try to bottle it in Scotland. Scotch Whisky Regulations do not allow whiskies distilled in a continuous stills to be labeled as "malt whisky". So, technically this whisky would be called a blended whisky instead of a blended malt even if the grain used in the coffey stills is 100% malted barley. Anyway, the whisky is Japanese, not Scotch; problem solved... Thanks to Teresa Hartmann for the generous sample. Color: Deep amber with slow and thick legs. Nose: Red bartlett pears, cold peach compote and cinnamon. Polished hard wood or more like wood treated with Danish oil. Caramelized brown sugar, hard pecan brittle and hint of smoke. Water brings up some grain whisky notes (even though we know there is none in there) with cloves, nutmeg and burnt corn syrup. Palate: Sweet but definitely less sweet than the nose suggested. Very malty with white pepper, ripe peaches and roasted walnut notes. Light pipe tobacco, golden raisins and toasted oak. Even with a few drops of water it got too watery, kind of lost its charm. At least for me... Finish: Warming with brown sugar, raisins and cloves. Overall: Pretty easy going whisky for people who like sweet(ish) whiskies. After tasting Nikka's Coffey Grain and Nikka's Coffey Malt whiskies before I admit my expectations were a little too high but if you think the price category All Malt is competing in I know that it's not so fair. It is a good tasting whisky for about $45 but I would prefer Nikka from the Barrel instead in that price range. Cute bottle with those love handles by the way...
blended malt blended whisky japanese whisky nikka whisk(e)y