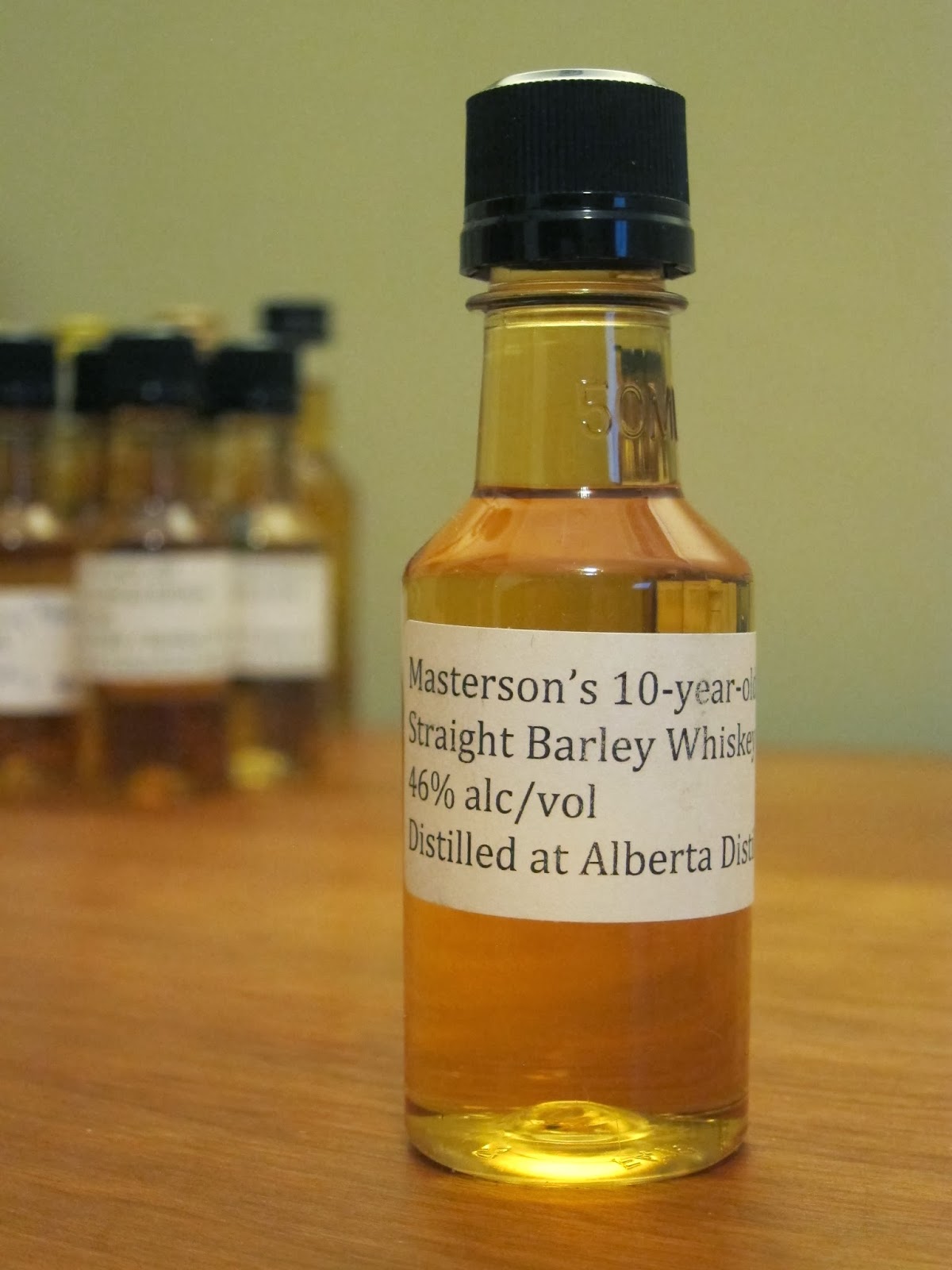 Masterson's 10yo Straight Barley Whiskey (46.0%): This is the second sample bottle I picked from #DavinTT2 Canadian Whisky prize basket. The whisky is distilled by Alberta Distillers and bottled and distributed by Sonoma, California based company 35 Maple Street. Although wine is their main line of business they do have a decent line of spirits including rye, wheat, barley whiskeys, gin and rum as well. This is actually the explanation of the American way spelling of "whiskey" on the label instead of Canadian way without an "e", in case you were wondering about. The batch yielded 12,800 bottles and is distilled from un-malted barley only. I never tasted a whisk(e)y before with a mash bill like this. I don't even know what to expect... After spending some time online I realized that people either loved it or hated it. Let's taste it then... Color: Pale yellow, chardonnay. Nose: Pine needles, green spruce wood and rosemary. Damp black garden soil and resin. Quite interesting and unusual. Adding water surfaces some sweet notes: bubblegum, dried strawberries, star anise and Twizzlers. Palate: Grassy, herbal, earthy and piney. Wet hay, bubblegum and powdered ginger. Caraway seeds and soy sauce. A few drops of water made it even more piney and greener: pallets of drying tobacco, busy wood mill where they plane lumber all day long. Finish: Pretty long with white pepper corns, hay dust and pine cones. Overall: I can totally see why some people didn't like it. It's definitely something you wouldn't expect from a barley whiskey. Actually it's nice how it shows the huge difference between all malted and all un-malted mash bills. So unusual but also interesting at the same time. It tastes almost like an aged grain jenever or maybe even like an aquavit. Also it's hard to believe that the spirit spent ten years in the barrel. The palate is so aggressive and young. The casks must have been second or third fill. If somebody told me that they put some spruce wood chips in the barrels I would buy it... So, it is an overall confusing whiskey. If you are up for a challenge you cannot find a better one. I enjoyed the ride but is it enough to justify the price tag around $65? I don't think so...
barley whiskey canadian whisky DavinTT2 masterson's whisk(e)y