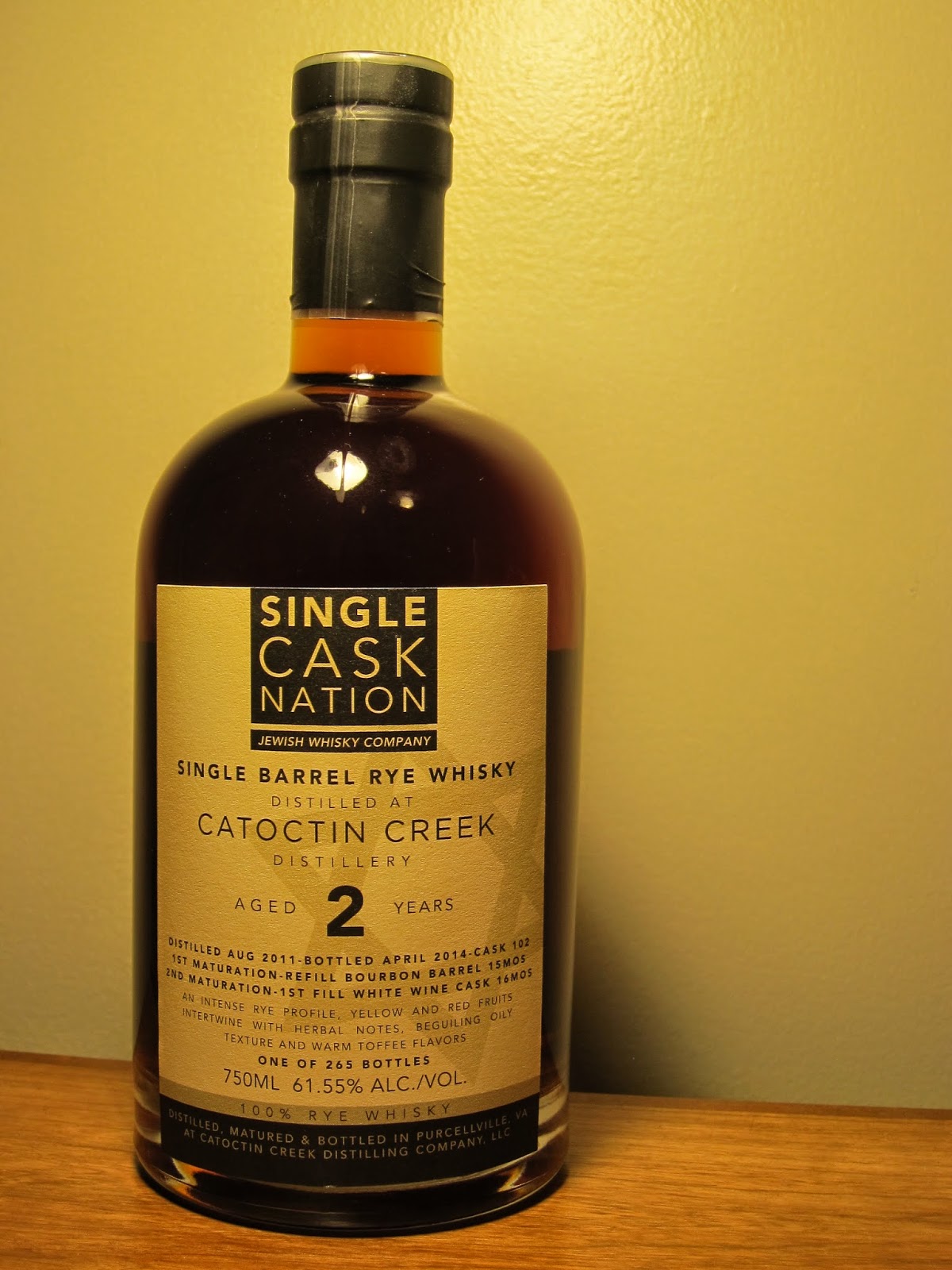 Single Cask Nation Catoctin Creek 2yo (61.55%): It's been a while since I reviewed a new release from Single Cask Nation. They have exciting new bottlings this year and this one is for sure a curious one. It's only two years old to begin with, distilled by Catoctin Creek Distilling Company in Loudoun County, Purcellville which is quite an odd ball in the middle of Virginia's wine country. The whiskey is made of 100% rye mash, first matured in refill bourbon barrels for 15 months and then transferred to Sonoma County Chardonnay casks for another 16 months sourced from Francis Ford Coppola Winery. The cask is numbered as #102 which yielded 265 bottles. Color: Very dark amber. Like a glass of Pedro Ximenez or spiced rum. Nose: Pretty sour nose with strong grape molasses aromas. It noses a little like a young Marc de Bourgogne. Wine vinegar, spruce needles and Simple Green. Walking in a dairy barn on a hot summer morning, bread and butter pickles and freshly squeezed lemon juice. Water adds some sweetness: Sweet and sour now, like a nice aged dry Caribbean rum. I also get the smell of a heavy woolen scarf when you pull it for the first time after summer from the deeps of your closet. Palate: So different than what the nose suggested. Didn't get too much of the sourness I was expecting. I get salty and sweet notes instead. Spearmint gum, quinine drops and green olive brine. Incredibly (and also dangerously) drinkable at this abv., I almost forgot to add water... After adding quite a bit water the whiskey nicely starts to show different layers: White pepper dusting and a slice of dense, warm German rye bread with butter melting on. Almost chewy mouthfeel... Dry vermouth, Metaxa, Ocean Spray white cranberry juice and dusty, dry, clay soil. Finish: Long with tongue tingling fine black pepper, strong tannins, lots of oak and Werther's Original caramel candies. Overall: Like I expected it is a very interesting whiskey. It would definitely pair amazingly well with Turkish coffee and might replace my beloved Metaxa there. I also can see that it would go well with mellow, not so spicy cigars for a long after dinner conversation or with eggy desserts like Mexican flan or creme caramel. It is a whisky you don't want to rush for sure. It's thick, bold, full of flavors and needs your attention and time... Looks like this bottle will keep company to me quite a long time. By the way remember that this whiskey is only two years old. Kind of mind blowing if you think about it...
american whiskey catoctin creek independent bottlers rye whiskey single cask nation whisk(e)y