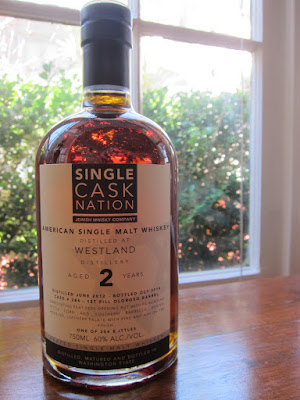 Single Cask Nation Westland 2yo (60.0%): Within a week after I moved to Los Angeles I realized that Joshua Hatton and Jason Johnstone-Yellin from Single Cask Nation were coming to town to conduct a tasting. Boom..! Guess who was first in line..? To be honest in the midst of all the moving to West Coast craziness I pretty much ignored my responsibilities to keep track of the new bottlings in the whisk(e)y world including the new expressions of SCN. So, it was a great chance to catch up with them and also meet some LA whisk(e)y enthusiasts. That night we tasted SCN's entire line-up including soon to be released casks and I ended up with two clear winners. While my number one choice is still trying to make its way through the US customs I went ahead and ordered this bottle which was my second choice. It is a peated single malt whiskey from Westland Distillery. Westland is founded in 2010 in Seattle and became one of my favorite new American distilleries this winter with their very impressive current line-up. This particular whiskey is aged in a first fill Oloroso Sherry cask which was numbered as cask #284 which yielded only 204 bottles. Color: Dark amber, chestnut honey. Nose: Brown Muscovado sugar and burnt orange peel. Cheery pie, root beer and buckwheat honey. With a few drops of water it gets sweeter: Banana cream pie, pipe tobacco and caramel rock candies. Also a touch of new car smell: dashboard, leather seats, etc... Palate: Hmmm, sour goodness... White grape juice and caramelized apples. Lapsang souchong tea, bergamot zest and lavender. Sweet and sour barbecue sauce, aged grappa and eucalyptus flavored cough drops. Water thins the texture down but the whiskey still stands up: Cooked prunes, beef stew, sap gum and over-brewed hibiscus tea. Finish: Long and dry. Menthol, fresh peppermint leaves and tri-color peppercorn mix. Gosh, it is a 120 proof whiskey and I forgot to add water..! Incredibly drinkable as it is. Let's add a few drops and then some new notes to the lines above. Overall: Well, obviously I liked it since I ordered a bottle right away. I still cannot put my head around the fact that this whiskey is only two years old. Although Single Cask Nation proved more than once that a two year whiskey can blow your mind it is still very impressive. Great cask selection like always... Kudos once again to the boys... 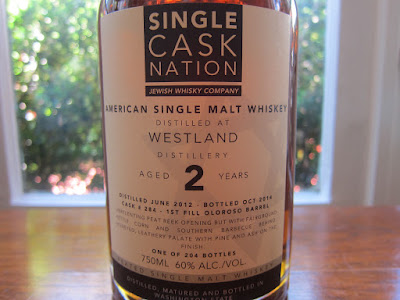