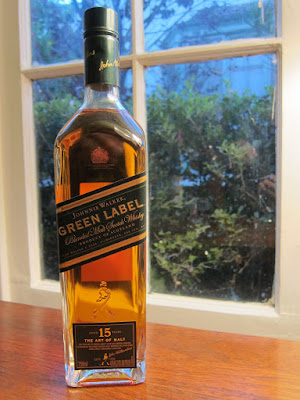 Johnnie Walker Green Label 15yo (43.0%): If I am not mistaken it was sometime in the beginning of 2012 when Diageo announced that they will be discontinuing Johnnie Walker Green Label. And they made it clear that what we had on the shelves in liquor stores were the last bottles available to purchase if we wanted to keep a couple bottles for old times sake in our cabinets. In following months instead of hoarding a few bottles for myself I patiently started to savor the dusty bottle hidden in the corner of my favorite watering hole (I was eyeing it for quite some time anyway...) in the neighborhood every night I stop by little by little without drawing anybody's attention. Then later in 2015 all of a sudden some new bottles resurfaced in North America... People thought that Diegeo changed their mind but apparently they were celebrating the "10th year Anniversary" of Green Label with a limited time offer bottling. I still think that they were only trying to liquidate the last batches of their 750ml bottle stocks they suddenly ended up with in their warehouses. They have only American and South African market to be able to do so after all. Anyway, lucky us... So, finally before the the year ends I decided to get one bottle for myself for the holiday season and now that's how it is sitting on my desk waiting to be opened. The vat is still the same old blend of malt whiskies distilled in four distilleries only: Talisker, Cragganmore, Linkwood and Caol Ila. Youngest component is 15 years old. Color: Clear gold, amber. Nose: Yellow grapefruit, meyer lemons and marinated herring in a jar. Hint of coastal peat and seaweed. Ripe Concorde pears, honeysuckle and jonquils. A few drops of water pulls that delicate peat a little more to the front: Dried salted cod, wet beach sand and ocean spray. Palate: Pretty thick and mouth covering. Heavy wool scarf you like to chew occasionally when you are walking on the streets of the city on a pretty cold winter night. Semi dark chocolate, strong cortado and crisp malt. Thick chestnut honey, sweet peat and apple compote. Water thins the texture but also adds some nice Asian pear, cooked prunes and milk chocolate notes. Also orange peel jam with whole cloves in. Finish: Longer than I expected. Dry sherry finish with walnut and simple cinnamon syrup notes. Maybe hint of white pepper. Overall: In spite of its relatively low abv at 43.0% adding water definitely helps the whisky on the palate. A nice old school blend, exactly like I remember. Not young, not restless and/or edgy like the new style of blended Scotch whiskies. Instead it tries to win the older clientele mimicking the style of well aged sherry cask matured single malt whiskies like Aberlour, Macallan and/or Cragganmore and I have to say it kinda nails it. Maybe that's why actually Diageo decided to take it out of the market. Nobody thinks that it is worth the effort to try to reach middle aged and older consumers anymore... The market spread out way wider than that and everybody is trying to get a piece of the younger market nowadays. They basically want to spend less, price it higher and sell more. That's what Double Black is for and doesn't make any sense financially to keep a 15yo blended malt at this price range with a way lower profit margin and a smaller market share. Anyway, to keep it short: It is a great bargain if you still can spot a bottle on the shelves before it completely disappears from the surface of the earth and a nice nostalgic journey... I definitely felt like in one of those ads in National Geographic magazine's glossy pages from 1980's. It will accompany me just great during Holidays. Happy thanksgiving everybody..!
blended malt johnnie walker scotch whisky whisk(e)y