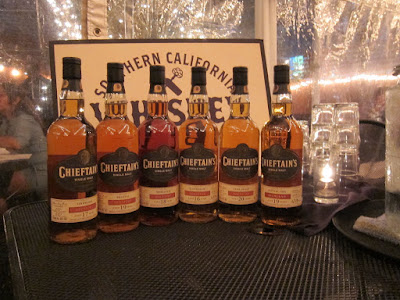 On Sunday evening we met at Everson Royce Bar, Los Angeles to taste some selected single cask bottlings from Chieftain's current line-up. It was a great evening hosted by Southern California Whiskey Club and moderated by Chris Uhde representing Impex Beverages. Chieftain's is an independent bottling line owned by Ian Macleod Distillers who has Glengoyne and Tamdhu distilleries on their portfolio as well as very successful blends like Smokehead, Isle of Skye, Black Shield, Clan Macleod and many others. I'm usually pretty bad to write down decent tasting notes during these kind of events since I like to talk a little more than a few descriptives. But somehow this time I managed to fill quite a few pages in my notebook which I later decided to put together for a blog post. Like I said they are shorter tasting notes than I like to post but let's give them a chance:

Braeval 19yo 1996 (red wine cask finish) (46.0%): Braeval (formerly known as "Braes of Glenlivet") is a rather young Speyside distillery built in 1973, mothballed in 2002 and started to produce again in 2008. It's owned by Chivas Brothers/Pernod Ricard and fighting constantly with Dalwhinnie to claim the honor for the highest distillery in Scotland. They both sit on hills with an elevation about 355m give or take. Unfortunately it is not mentioned what kind of red wine the cask held prior the whisky or how big the cask was. Nose: Raspberry marmalade, dried strawberries and cranberry juice. Green tea, red gummi bears and lemongrass.  Palate: White pepper dusting, old newspapers and bitter greens. Powdered ginger and fennel seeds. Very dry and mineral. Almost like drinking mineral water from an aluminum can. Surprise: a slight touch of dusty peat hidden somewhere way back. Finish: Medium long. Dusty with unsweetened dried cranberries. Overall: The palate is surprisingly peppery in contrast to the sweet nose which makes it a little unbalanced and restless but it is a very nice after dinner sip nevertheless.

Glenburgie 16yo 1998 (hogshead) (46.0%): Another Speyside distillery from Chivas Brothers/Pernod Ricard portfolio which appointed the first female distillery manager in 1927. The distillery was known also back in 60s with their brand Glencraig, a whisky distilled by a pair of Lomond stills only. Nowadays the distillery produces its whisky mostly for the Pernod Ricard blends Ballantine's and Old Smuggler. The whisky in our bottle comes from an ex-bourbon hogshead. Nose: Overbrewed black tea, actually more like earl gray tea. Pink grapefruit and satsuma zest. Palate: Wet cardboard boxes. Hot with black peppercorns, paprika and crushed red pepper. Pine cones, fresh rosemary and salt. Finish: Long and peppery. Overall: It might be a little too hot on the palate for whisky lovers with a sweet tooth. I loved the black tea notes on the nose and wet cardboard notes on the palate which actually reminded me old Campbeltown whiskies. Nice and solid but a little too peppery...

Linkwood 17yo 1997 (oloroso finish) (46.0%): Linkwood is one of the important building blocks of Diageo's empire with a capacity of 5.6 million liters of alcohol per year and it is the backbone of their major blends like White Horse and Johnnie Walker. The distillery sells their product to other blenders as well. The whisky in front of us tonight is finished in an Oloroso sherry cask. Nose: Peppermint, red Altoids. Cough drops with eucalyptus, spoiled milk, cooked raisins, dried apricots and roasted hazelnuts. Palate: Big bold Oloroso sherry notes all over the palate, yummy... A lot of grape skins with a rich and velvety mouthfeel. Beef stock, prunes, Catalan flan and a healthy amount of salt. Finish: Medium long and beautifully tart with unsweetened white grape juice. Overall: So far, my favorite, hooked. Great finish... I enjoyed that sourness on the palate and at the finish immensely.