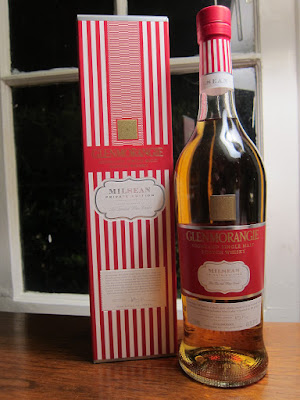 Glenmorangie Milsean (46.0%): So, here is the seventh release of Glenmorangie's Private Edition range. This time Dr. Bill Lumsden took the idea from his childhood memories of sweetshops, and confectioneries. He wanted to create a Glenmorangie which will bring back the sweetness of pear drops, parma violets and candy floss of 1960s and 70s. He started to think how to create that flavor profile, sat down also with Jim Swan to share ideas and to pow wow so to say. After a while he wanted to give a try by giving the whisky which was initially aged in ex-bourbon casks an extra amount of maturation by putting them for two and a half years in red wine casks previously held red wine from Douro Valley, Portugal. But the key trick here was re-toasting these Portuguese red wine casks without scraping off the inside of the barrels and allowing the residue of the wine and all the sugar to caramelize into the wood. Gosh, it sounds so mouth watering already... Let's pour some into the glass and taste it. Milsean is Gaelic for "sweet things". The whisky is non chill-filtered and bottled at 46% abv. Color: Light amber, crystal clear with very distinct and persistent legs. Nose: Well, it noses like a candy shop indeed: Rock candies, candy canes, hard candies and cotton candy. Burnt sugar, caramel fudge, fresh mint leaves and fresh malt. White peaches, dried apricots, Granny Smith apples and pomegranate. After airing a little it gets grassy: dried grass, hay and wet clay. Light, perfumy and sweet. Adding water erased all the grassy aromas though and shifted the nose to an even more sweet side. Palate: Nice beautiful Glenmorangie backbone topped with tons of red fruits: Pomegranate, dried cranberries, dried strawberries and red plums. Some spiciness, mostly as cinnamon, ground ginger and peppermint. Tart red fruit sorbet, candied lemon peels and again Granny Smith apples. Despite the loss of aromas at the nose adding water works actually pretty good at the palate. It highlights the citrusy and spicy notes: Pink grapefruit, kumquat and nutmeg. Finish: Short... Sweet with ginger, ground cloves and cake batter. Overall: Looks like Dr. nailed it... He wanted to create the candy shop whisky and here it is. I don't know maybe because of the whole backstory and the press release it was almost impossible to think anything else but this is the most candy notes you can get from a non-flavored whisky I believe. Actually I was prepared for something way sweeter and viscous but all the caramelized sugar and candy notes are pretty well balanced with citrusy and grassy notes throughout the ride. I wish the finish was a little longer so it could linger a little more though... Anyway a special whisky for people with sweet tooth and a great dram to finish the night with your dessert. I don't think this bottle will last too long in this household since we actually already made a big dent on the bottle... 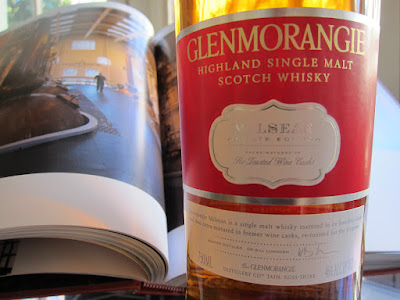