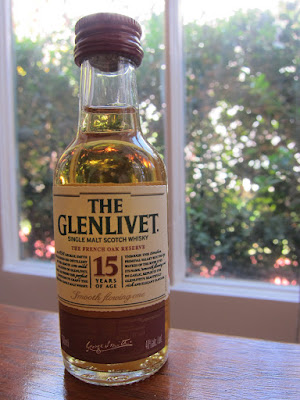 The Glenlivet 15yo "The French Oak Reserve" (40.0%): After Pernod Ricard launched Founder's Reserve last year and announced the discontinuation of 12 year old in most markets suddenly in those countries 15 year old became the youngest bottling of The Glenlivet line-up with an age statement. Although my personal favorite has been always ex-bourbon cask matured Nadurra bottlings, The French Oak Reserve undeniably has a very loyal fan base. It is a blend of whisky aged in American oak and sherry casks which went through an additional maturation of three years in French Limousin oak casks. A little French touch courtesy of Pernod Ricard paired tonight with some Charles Lloyd recordings from 60's... Color: Orange blossom honey, medium amber. Nose: Fruity, floral and malty. It noses like contemporary Irish single malt bottlings with the addition of some beautiful rose petals and rose water aromas. Cherry juice, fruit punch, fresh table grapes and mixed berry sorbet. Cherry Danish and morning bun. A few drops of water pulls the conversation to a greener corner rather than red. Banana cream pie, ripe apples and Anjou pears now. Palate: Cherries on the palate as well... This time like a diner style cherry pie topped with whipped cream, Snapple Mango Madness, orange Gummi Bears. Juicy and extremely easy going but thin in texture at the same time. Green malt, cinnamon dusting and nutmeg. Star anise and ground white pepper. Although it completely destroyed its texture I kinda liked the addition of a few drops of water. It got dusty and a little old school... Finish: Peppery like all other Glenlivet distillates but on the shorter side. Some creme caramel and toasted oak. Overall: It is a decent and tasty dram, no doubt about it but somehow it doesn't deliver like a 15 year old whisky. It's thin and not layered mostly because of its low abv. There is absolutely nothing offensive about it from nose to finish and maybe that's why it is bugging me that much. It is too lovely so to speak... It doesn't have distinct notes I can pick, record to my memory bank and remember later when tasting another dram to say: "Hey, it reminds me The Glenlivet The French Oak Reserve..!". For my two cents there are many other exciting whiskies to purchase in this price category instead. But it's a matter of taste... It would be a great choice to bring to a party and I don't see anybody possibly complaining about it. It is a crowd pleaser... A perfect dram to drink more than a few glasses while you are listening to some great music like I do now and socializing. At the end this wee bottle was an excellent pairing with Charles Lloyd's music and that's probably how I came up with the bottle to bring to the party idea to begin with...
glenlivet scotch whisky single malt speyside whisk(e)y