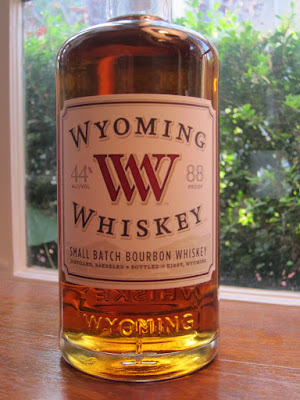 Wyoming Whiskey Small Batch Bourbon Batch #34 (44.0%): This week I got a new bottle delivered from Bottled Wyoming... This time it is the regular expression (white label) from Wyoming Whiskey's portfolio, their flagship bottling so to say. Back in October I reviewed a single barrel (#841) release from the distillery and I was absolutely fascinated by it... The bourbon in the bottle is crafted by Bourbon Hall of Fame inductee, master distiller Steve Nally who moved to Wyoming some years ago with his 33 years of Maker's Mark experience to distill Wyoming Whiskey. The mash contains 68% corn, 20% wheat and 12% malted barley and no rye. All grains are sourced locally from within Wyoming State. The whiskey is aged in standard size 53 gallon barrels and filled at 115 proof (57.5% abv). The barrels are aged in warehouses in Kirby which are not equipped with temperature control equipment allowing the whiskey to mature while being exposed to extreme cold of Wyoming winters and pretty high temperatures in summers. First batch of their bourbon came out in 2012 and the first single barrel release got introduced in 2014... The bottle I am pouring now is labeled as Batch #34. Color: Medium amber, honey color with nice thin legs around the glass. Nose: Green wood, spruce and pine straw mulch. Orange peel, birch beer and cream soda. Vanilla... I feel like having a walk under high summer sun in dense woods: Dry air, dry grass and sap. Toasted pine wood, mint leaves and lemon iced tea. Palate: Piney like the nose... With addition of light cinnamon dusting, orange blossom honey and hardwood shavings. Cooked prunes, overripe baby bananas and cream soda again. Dried cherry, green malt and young alcohol notes without the burn. It is sweeter on the palate than what you would expect from the nose. Finish: Medium. Toasted baguette and butter, cinnamon and charred oak. Sweet... It felt more like a small barrel aged young bourbon now on the finish, odd... Overall: I very like this bourbon. It is one of my favorites among the new generation bourbons. It feels quite young on the palate but not rushed. At the end I have to say the price difference between this bottle and its beefier brother single barrel is pretty much worth it though... If you are lucky to see both of them on a shelf sitting next to each other you should definitely grab the single barrel release. Needless to say my comparison is between batch #34 and the barrel #841 and that barrel was yummy... So, I think from now on I will start to check Bottled Wyoming daily for the next single barrel release because it was impossible to find it anywhere in Southern California. 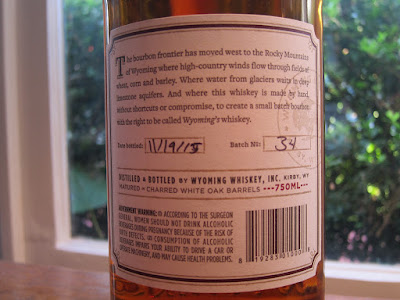