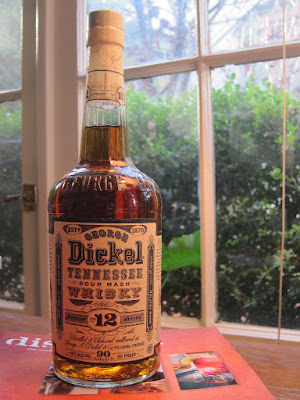 George Dickel 12 (45.0%): I have to admit that I am not the biggest fan of George Dickel... I don't enjoy high corn mash-bills that much. But after they announced their newest release last week with a pretty good story attached to it I thought that I should revisit... Yes, Diageo got lucky again..! They found 84 barrels in their warehouses which were apparently not shown in any kind of inventory list for years..! Again..! And this time the barrels were holding 17 year old George Dickel whisky. Of course the casks got married immediately, bottled in cute half size bottles and with a price tag of $75 attached to their necks... You know what..? I really don't even care if the story is right or not at this point. I just don't want to buy over-priced whisky anymore. Period... As simple as that... Instead while I am sitting in front of my TV I will pour now some of my good old 20 bucks a bottle white label Dickel which was waiting on my shelf for some time... It is distilled from classical Dickel recipe of 84% corn, 8% rye and 8% malted barley. Color: Medium-dark amber, mahogany. Nose: Very distinct corn nose... Warm polenta and corn on the cob... A little sour on the nose with pickled banana peppers and olive brine. It opens up after allowing it air for a minute or two: Caramel popcorn, vanilla and fudge. A few drops of water shifts the nose to a sweeter side. Honey bon bon candies and peanut brittles. Palate: Hot and oily on the palate. Still a lot of corn notes but now covered with brown spices and toasted oak. Popcorn, nutmeg and cloves. Corn tortillas, toasted staves and ground ginger. Greek loukoumades with cinnamon dusting. Adding water works great: Now way milder and creamier. It didn't thin out the mouthfeel particularly but added some coarse salt, peanut butter and cumin. Finish: Long with white pepper, cinnamon and salt. Overall: It is definitely a very solid whisky for its price... Handles water and a lot of ice very well which makes it a good whisky to enjoy in hotter months. Especially today while the temperatures are reaching three digits (in F) for the first time this summer in Southern California.