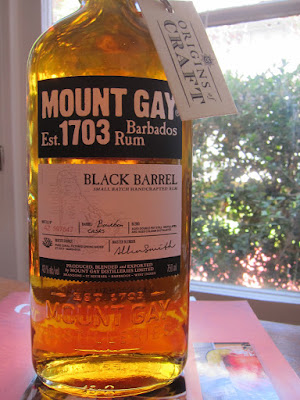 Mount Gay K&L Exclusive Custom Blend Black Barrel (43.0%): Black Barrel is added to the Mount Gay line-up in 2013... It is a blend of already aged double distilled pot rum and single column distilled rum finished in deeply charred ex-bourbon barrels. This particular bottle is from a batch blended in 2015 exclusively for K&L Wine Merchants but I honestly don't know exactly what the differences between this batch and regular releases might be.

Palate: A thick layer of cinnamon dusting and powdered cloves on the palate. Almost at a level of being unpleasant... Honey, oak shavings, furniture polish and young alcohol.... It is oozing sweet despite the nice spiciness on the nose. Garam masala, allspice and cooked prunes. Burnt caramel and Werther's Original caramel hard candies... Like somebody tried to save a heavily burnt creme caramel by covering it with the entire jar of cinnamon. Fireball shots and cinnamon Altoids...

Overall: Although I appreciated the ex-bourbon barrel notes on the nose in the beginning they are not nearly strong enough to compete with the overall sweetness on the palate. The cinnamon and young alcohol notes are so overpowering, it is impossible to concentrate on anything else... Too sweet for my palate... I am sure that it will work great in cocktails and will blend great with cold coffee products over a lot of ice but I don't think that I will want to sip it neat or on the rocks.

Price: $25 (Although regular Black Barrel is widely available this batch can be purchased only from K&L Wine Merchant stores) 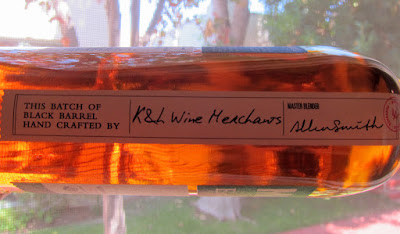