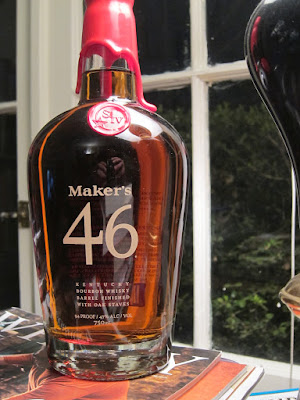 Maker's 46 (47.0%): In principal the bourbon in Maker's 46 bottles is the same bourbon used for original Maker's Mark but finished in special barrels with seared French Oak staves mounted inside for an additional period of time. Other than that it is the same wheated mash bill, same distillation process, same cuts and same initial aging conditions. The number "46" stands for the industrial classification of the additional French Oak staves used in the final maturation process indicating their charring level and origin... I wonder if I am the only one who thinks that it is a little confusing from a consumer standpoint to bottle a bourbon so dominantly identified with number "46" at 47% abv.

Nose: Familiar sweetness of Maker's Mark initially but develops with additional layers one after another. Cinnamon sticks, cloves and sparse nutmeg dusting on your latte. Almond and caramel brittles and brown sugar cinnamon butter melting on a piece of warm corn bread. Toasted oak, walnut liquor and anise seeds. It's been a while since I enjoyed a nose on a bourbon that much.

Finish: Longer than I expected actually... Tingly feeling on the tongue. Dry oak, nutmeg again and some allspice. Gets a little bitter and also peppery.

Overall: Well, it is a huge improvement for $10 more than a regular bottle of Maker's Mark. But on the other hand if you think that a regular Maker's Mark is sold for 20 bucks only it is a 50% increase... Personally I wouldn't blink to pay the difference. It is the perfect "everyday wheated bourbon" for my whisky cabinet especially nowadays when it is almost impossible to find a W. L. Weller bottle around and after the inevitable loss of Old Fitzgerald 12. I am sold...