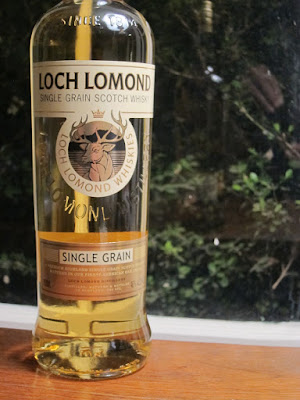 Loch Lomond Single Grain (46.0%): Now this is an interesting one... Although the whisky is distilled from a 100% malted barley mash it is still bottled as single grain since a column still is used during the process instead of a pot still. As you might already know Loch Lomond distillery owns two pot stills, six Lomond stills and one column still under the same roof as well as an additional distillery on site producing just grain whisky and grain alcohol which makes them a quite unique distillery. If there was a term such as "single blend" they could be the only distillery allowed to put it on their label of their blended whisky. Also some of you also might remember Loch Lomond as Captain Haddock's favorite whisky brand in The Adventures of Tintin... When Herge started to use the "made-up" brand Loch Lomond in his comic books in 1966 to replace Johnnie Walker's appearance he was using till then to avoid a possible law suit he was simply inspired by the popular holiday destination of that time, Loch Lomond. He wasn't even aware that a distillery with the same name was about to start distilling whisky the very same year... Fun fact...

Palate: Young and spirity but also warming at the back of your tongue. Vanilla, plain custard and toasted grain. Coconut, Catalan flan and pear compote. Fruit genever, lightly toasted oak and hint of nutmeg. Raw and thick, woolen Scandinavian sweaters and oatmeal cookies. Overripe bananas. Water works better on the palate... Gets incredibly easy to drink with less of young alcohol burn.

Overall: I am surprised... Pleasantly surprised. I don't know, maybe I was in the right mood, maybe it was the right time of the day but I enjoyed this whisky quite a lot... Great pub whisky: Easy drinking, would work perfect as an afternoon whisky and would also mix good in cocktails. To be honest I was expecting a far young, harsh, bland and a somehow "boring" whisky. It is mostly a 4 - 5 years old grain whisky after all... But it surprised me... Anyway, it won't be a substitute for your favorite single malt Scotch but easily can claim its own little space in your cabinet. And... A bottle costs $28... Hard to argue with that. Again thanks to Benito Quinonez from Loch Lomond Group and Kate Laufer Gorenstein from KLG Public Relations sending me this sample bottle...