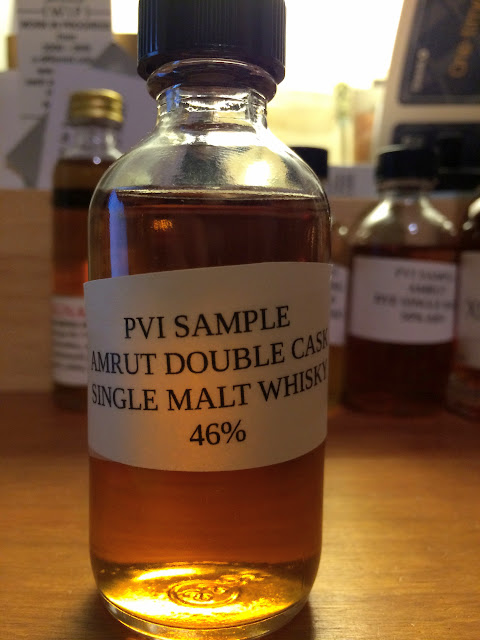 Amrut Double Cask (46.0%): And the second Amrut sample I received within this week... Amrut Double Cask is a marriage of two single casks. First one is a 7 year old ex-bourbon barrel (#3451) and the other one is a six year old PX Sherry butt (#3802), both filled with unpeated spirits. Some of you might remember the legendary first release of Amrut Double Cask from 2010 but I wasn't lucky enough to taste it back then. If I didn't miss anything between now and then this one should be the 2nd edition from the distillery under the same label.

Palate: Very dry... Ex-bourbon barrel takes the lead on the palate. Toasted new oak, allspice and ground cloves. It made me think of micro barrel aged North American bourbons immediately. Odd... A lot of young toasted wood and Middle Eastern spices. Cumin, cinnamon and cardamom. Some black garden soil, prunes and Christmas spice mix. Adding water works great: Nutmeg, cinnamon and freshly ground black pepper. Still dusty and chalky but in a very good way. Some Armagnac notes to enjoy as well... I am so curious now where they sourced the ex-bourbon barrel from. I would love to know if it is the Indian climate or the origin of the barrel causing this particular micro-barrel(esque) taste profile.

Overall: Limited Amrut expressions are nothing but surprises... Right now when I was getting ready to taste a sherry dominated profile after what I got from the nose initilally it hit me with a dry and spicy new craft bourbon palate instead. I know the label says "barrel" for the size of the ex-bourbon cask used for the vat but it taste so much like a small cask matured American bourbon. If you are a fan of craft bourbons with a lot of wood influence and spices you will absolutely fall in love with this bottle. Thanks again to Raj Sabharwal and PVI Global for the sample. 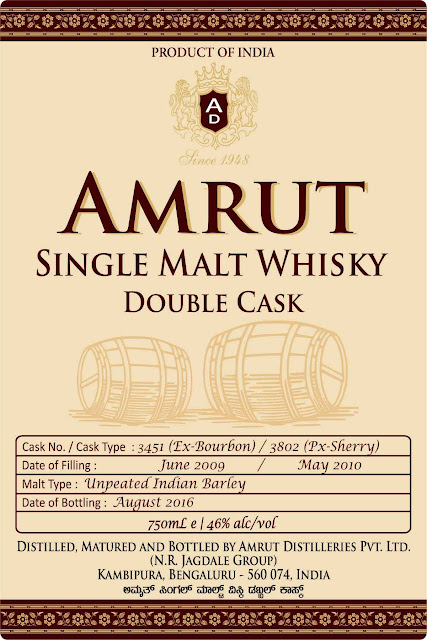