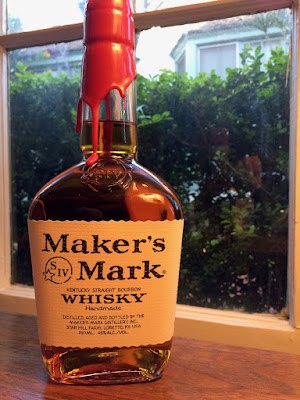 Color: Polished copper, medium amber with thin but persistent legs around the glass.

Nose: For me the signature of Maker's Mark on the nose is this sweet mint candy aroma... Almost like red and white peppermint candies. And then vanilla, caramel swirl and cinnamon. Corn flakes and other cereals, milk chocolate and chalk. It has a little bit of that new make spirit burn in the beginning but waiting for a minute or two to allow it to air helps a lot.

Overall: Who doesn't like Maker's Mark..? It's sweet, easy drinking, cheap, good with lots of ice, good in cocktails but also okay to sip with just a couple of ice cubes on a hot summer night. I even enjoy it by myself despite having serious reservations about high corn mash bills... For my two cents I would pay that $10 difference to get a Maker's 46 instead any given time but I cannot imagine any occasion where I would refuse Maker's Mark when offered either. Definitely well worth the price you pay for. A true classic...