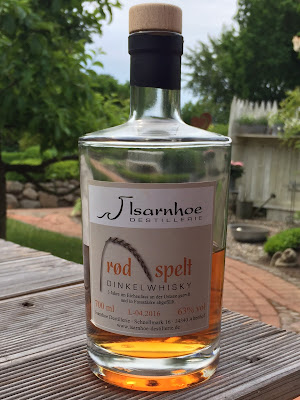 Isarnhoe Rod Spelt (63.0%): Isarnhoe is a tiny distillery situated north of Kiel, Germany very close to the Danish border. They produce in very small batches a pretty large selection of different distilled products including some whiskies. This whisky I have the sample of is distilled from red spelt to begin with which is a local variety of spelt grain. Then it is aged for three years in a French red wine barrique which was used before to mature mead for a year.

Nose: Oops, I should have left it air for a couple of minutes. What was I thinking? Burning hot... After a couple of minutes it gets much better. Fresh almonds and latex gloves. Nutella, tung oil and walnut liquor. A generous amount of water helps: More nutella, almond oil and varnished hard wood. Some herbal qualities in the background that I found quite intriguing, almost like an aged aquavit: Sage, fennel and red liquorice. It is a very young spirit...

Palate: Very hot at this abv... Toasted cedar, allspice and nutmeg. After adding water it opens up with rosemary, pine cones and pine honey. Herbal notes I got on the nose are all present on the palate as well: Coriander leaves, green sage and lightly toasted dry wood. Very much like an ultra young American craft rye whiskey minus the wood influence to cover the harshness of the young spirit.

Overall: Love these kind oddities.... It's nutty, interestingly herbal and definitely shows potential but unfortunately incredibly young and harsh as now. I agree that the young bottlings of new craft distilleries should be approached with a different mindset and therefore I want to think that this release is an attempt to create awareness for the brand and/or is an early one-off to raise money for the distillery. Because if they think that the whisky in the bottle is ready to be released instead and that it is worth €60 a bottle, oh boy, they are on a wrong path. This whisky is not ready in my opinion, not even close. It might have potential but not just yet... I am curious how their rye whisky Stella Nova will taste like after this which I also have a wee sample of. Thanks to Jens Fischer again for the samples and this time for the bottle photos shot in his beautiful garden as well...