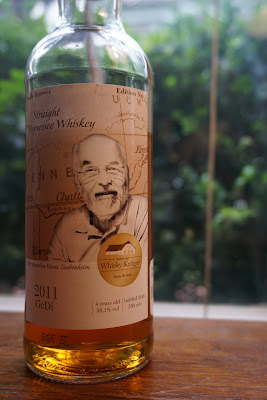 Taubi Forever Straight Tennessee Whiskey 4yo (59.1%): Second Whisky Kruger bottle I brought back from Campbeltown which is dedicated to Heinz Taubenheim a.k.a. Mr. Bourbon who passed away in 2016. It carries a small note on its label which says "Taubi forever". For those who are not familiar with the name Heinz Taubenheim he was one of the biggest American Whiskey collectors in the world if not the biggest one. His garage on "Bourbon Street" (Yes, the street was named after his collection...) in his hometown Griebelschied, Germany used to be a mythical place well known amongst whisky lovers all over the world. Nowadays part of his collection is exhibited in the Whisky Museum of Whisky Kruger and the whisky chosen to celebrate his memory is a four year old Straight Tennessee Whiskey distilled in 2011 by an "undisclosed" distillery coded with the abbreviation "GeDi" and bottled in 2016 at cask strength. So, there isn't that much room left for us to play the guessing game here... George Dickel it is... That means the mash-bill supposed to be 84% corn, 8% rye and 8% malted barley.

Nose: Corn bread, salted butter and that signature tartness of George Dickel that I love: Tomolives, dill pickles and olive brine. It gets a little sweeter after allowing it air a couple of minutes. Caramel popcorns and peanut brittles. After adding a few drops of water we have mostly all corn now. Corn on the cob, polenta and popcorn.

Palate: Unlike other Dickels it holds the sour notes on the palate. It must be the high abv. Green olives, green banana peppers and cornichons. Mouth covering with an oily texture. A little hot at cask strength but totally drinkable. Water opens it up... Yes, it erases most of the sour notes but the whisky still holds its complexity unlike what happened on the nose. Ginger, nutmeg, cloves and cinnamon. Toasted oak, unripe green plums and grapefruit peel.

Overall: This is one of the best George Dickel bottlings I have ever tasted... I think there were a couple store pick single cask bottlings which came close to this before but that's about it. I am not a big fan of high corn recipes but I'll take this dram anytime anywhere... Solid whisky and especially for this price... But at the end let's spare a few seconds and think about the journey of this whisky.. It distilled and aged in Tennessee, made the journey all the way to Holzbunge, Germany where it was bottled and placed on shelves. Then brought to Campbeltown by my dear friend Jens Fisher a.k.a. Whisky Quiz so we can taste and enjoy it together. And at the end half of the bottle returned with me back to US from Scotland but this time to Los Angeles and now it's sitting on my desk while I type this review. Fascinating story... Isn't it..? Thanks again to Jens for the sample. 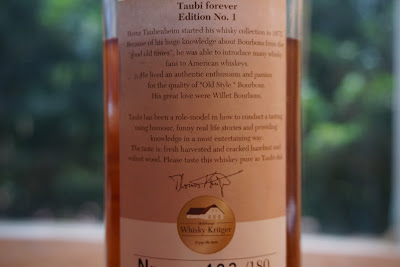