Visiting Sonoma County Distilling and West of Kentucky Bourbon No.3...

I first met Adam Spiegel the owner and the head distiller of Sonoma County Distilling Company maybe five years ago at the legendary The Last Hurrah bar in Boston during a Whisky Live week. Our mutual friend Robin Robinson introduced us to each other... Although I didn't know his whisky back then his attitude, directness and self-confidence left an impression on me. Not much later I had the chance to sample a few expressions from his distillery and since I moved to West Coast visiting the distillery was on top of my to do list. So, naturally a couple of weeks ago when we hit the road from Los Angeles to Northern California Sonoma County Distilling Company was the first destination.

After an extensive tour and going over the entire process in every little detail Adam also showed us the new buildings adjacent to the current distillery which he is planning to move into in a few months. They are expanding with the addition of two brand new Forsyth stills from Scotland and also building new warehouses to accommodate the soon to be increased capacity. Right now the distillery runs on five small capacity alembic stills. He is planning to keep all of the stills operational though even after receiving the new ones to keep the possibility of distilling different style of whiskies and to continue experimenting.

In Sonoma County Distilling Company they are committed in pot still distillation and direct fire heating. They believe in open top / wild yeast fermentation and in longer maturation times using larger size barrels. They want transparency on labels, aim to be totally clean energy driven in near future and to continue to invest in innovation. They even experiment with water where they age some of it in casks.


At the end Adam has one very specific goal in this business. He says out loud that he wants to produce the best whisky in the world... Simple as that... And he is serious about it. Well, for my two cents he already showed that he has the patience, persistence, energy and discipline needed for his goal... He is young, amped, motivated and he is even more self-confident now than he was five years ago. I cannot wait to revisit the distillery after the move is complete and when spirit starts to drip from the new stills into the spirits safe. I want to witness the progress while it is happening... 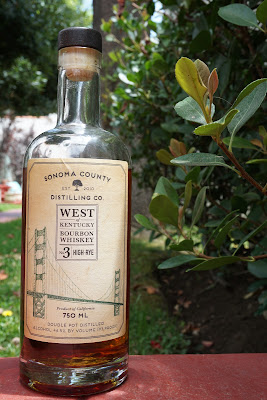 Sonoma County Distilling West of Kentucky Bourbon No.3 (46.5%): This is the third and the newest bourbon recipe released by Sonoma County Distilling Company. It is a high-rye mash bill using yellow corn sourced from Midwest, rye from Canada and malted barley from Wyoming. The whisky is at least a year old and bottled in Summer of 2017.

Overall: It is a young but tasty bourbon... Don't let the nose scare you off. It is way more calmer and layered on the palate and it benefits from airing immensely. Now I am sipping my second pour and it is growing in me more and more. I didn't put my notes I scribbled after adding a few drops of water since I didn't like what water did to it but you should definitely try adding water as well. Just to see if you will agree with me or not... I quite enjoyed this bourbon and I am sure it will get better with longer maturation. Recipe No. 3 is definitely noted down and will be tasted again...