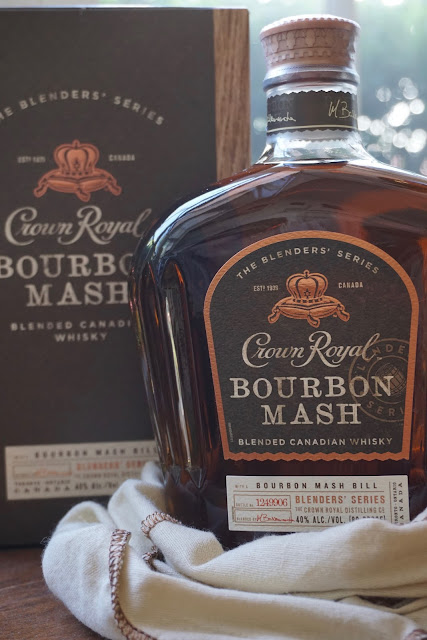 Crown Royal Bourbon Mash (40.0%): We all love controversies in the whisky world and we definitely are not short of them. Never were and never will be... Because on top of everything controversy sells whisky. When Diageo announced the release of this Crown Royal expression a few months ago it caused quite a bit of uproar because of the usage of the word "bourbon" on the label. According to US law the word "bourbon" cannot be used on the labels of the bottles which are not bourbon... Crown Royal is made outside of the US and therefore is not a bourbon, end of story... Anyway, because TTB initially approved Diageo's label (nobody knows how or why...) by mistake they negotiated a settlement and Diageo was allowed to sell in US what was already bottled and distributed. That's how I got this bottle last month. Soon enough it will be relabeled as "Blender's Mash" but they will continue to sell the same whisky as "Bourbon Mash" back in Canada.

Nose: Cloves, garam masala and cinnamon. Custard, caramel and honey... Allspice, black pepper and artificial vanilla extract. Quite nice and pleasing but nothing pronounced. Very calm, mostly even and maybe a little boring. There is also a fresh grassiness on the nose I enjoyed a lot though: Fresh mint leaves, fresh coriander and maybe even green asparagus.

Palate: Very thin mouthfeel. Watery... Other than that the profile fits the nose pretty much seamless: Cloves and cinnamon with the addition of some ground ginger and nutmeg. Honey syrup and creme brulee. The grassy notes I was excited for on the nose are not present but I have freshly brewed espresso and coffee hard candy bonbons instead.

Finish: Short but still longer than you would expect after that watery palate. White pepper, nutmeg and cloves all fading out rather quickly. Not very satisfying...

Overall: It's an incredibly easy drinking whisky but it's not giving you anything to hang on to or remember later...  It's tasting ok for the most part but is thin and watery. Like forgetting the tumbler you were sipping with an ice cube in while watching your TV and finding it where you left the next morning... There must be quite a lot lightly charred and/or refill casks in the batch. I probably never would say no when offered but cannot also think of any reason which would make me buy another bottle. A cask strength and/or non chill filtered version would be interesting though, just saying. It would help to give the whisky some texture and that much needed umpf. Anyway no hard complaints after paying only 22 bucks for a bottle. It is what it is...