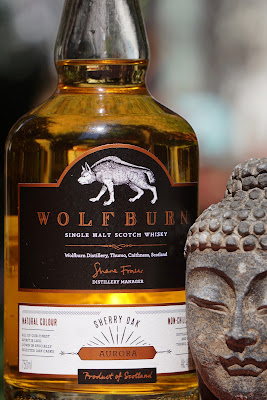 Wolfburn Aurora (46.0%): This is a three year old single malt from Wolfburn the most northerly located distillery in Scottish mainland. Current Wolfburn distillery is situated right outside of the small town Thurso all the way up at the very end of A9 road next to the site of the old distillery which ceased production in the middle of the 19th century. First barrels got filled in January 2013 and they didn't waste any time to release bottlings right after their spirit became whisky in early 2016. Aurora is the second whisky of the distillery put in the market shortly after the release of Northland. It is matured 40% in second-fill quarter casks, 40% in first-fill ex-bourbon barrels and 20% in first-fill Oloroso sherry hogsheads.

Palate: The palate carries more of the young and untamed spirit notes we would actually expect from a three year old whisky. Apricot pits, grape seeds and jasmine tea. Creamy mouthfeel... Dry hay, barley and hint of nutmeg at the back of the tongue. There is a herbal bitterness I cannot quite pin down: Over brewed green tea maybe? Or bitter almond cookies and dandelion leaves... Chartreuse..? This bitterness is not an off-note (at least not for me) but doesn't blend very well with all the other sweeter notes. Adding water didn't add anything to the palate either. It just thins out the texture and makes it watery. So, no water for this one...

Overall: Well, if you judge it as a three year old whisky it is one of the best I have ever tasted... But if you compare it with other single malts from Scotland in the similar price range that's where it gets a little complicated. It definitely has a long way to go... I like young whiskies and therefore I am quite ok with what I have in my glass but I also have to admit that I purchased this bottle at half price. I can totally see (and understand) that that bitterness on the palate and finish might cause some serious dissatisfaction among other whisky enthusiasts... With aging stocks in the warehouses I am sure that in near future Wolfburn won't need that many quarter cask matured new make spirit in their batches and those herbal and bitter notes will dial down quite a bit. There is no doubt that the whisky in the bottle has a great potential...