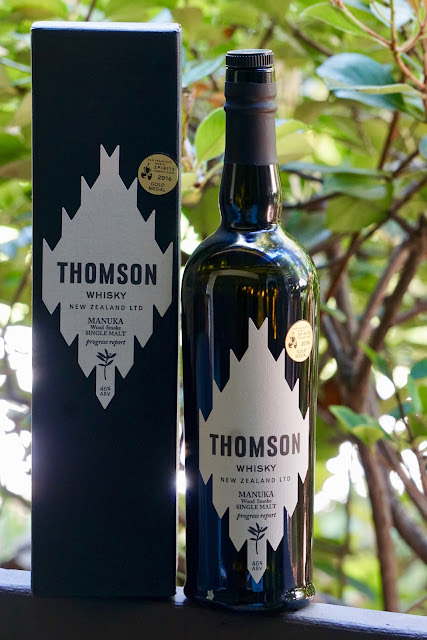 Thomson Manuka Wood Smoke "Progress Report" (46.0%): A couple of weeks ago we hosted some very close family members for a night on their pit-stop while traveling from New Zealand to New York. They were incredibly sweet to carry a bottle of whisky for us all the way from their homeland. After dinner while we were pouring the first drams in our glasses I was already online looking for more info about this whisky I never heard before... Here is what I found: Apparently the Thomson family started their business as independent bottlers in New Zealand before they decided to build their own distillery in 2014. The distillery is located in Riverhead just northwest of Auckland and equipped with two pot stills. They distill using all local ingredients and I have to say they managed to build a pretty extensive portfolio in a very short period of time using different grains, drying techniques and maturation methods with the addition of bottlings from the closed Willowbank Distillery. This particular whisky is distilled from 100% malted barley sourced from South Island and smoked using local Manuka Wood. If I understood the process correctly the barley is not dried using Manuka Wood smoke but the dried barley is smoked afterwards. It is labeled as "Progress Report" by the way hinting that the whisky is still young and more mature batches will be released in future.

Nose: Party balloons, latex gloves and LPG gas burner. Plastic shopping bags and paper glue... It noses incredibly young: New make, stainless steel containers and raw wood. A rather unpleasant hike in the forest under scorching sun: Dry pine needles, tree sap and charred pine cones. I have to say that this whisky doesn't nose like it was ready to be bottled.

Overall: Back in 2000s in the beginning of the craft whisky boom this whisky would be more welcomed for sure. Those years everyone including me was extremely supportive of startup distilleries especially if they were local but I don't think that it is still the case. This is an extremely demanding whisky... I know that it is still a "work in progress" product and I shouldn't be very judgmental but they also do ask a lot of money for this bottle... In the end it's pretty harsh, rubbery and bitter dominated mostly with new make and raw wood notes. Hard to tell how it is going to evolve in years but it sure needs time more than anything else at this point. Thanks to dear people who carried this bottle literally from the other side of the world all the way to Los Angeles..! What an amazing gesture..!