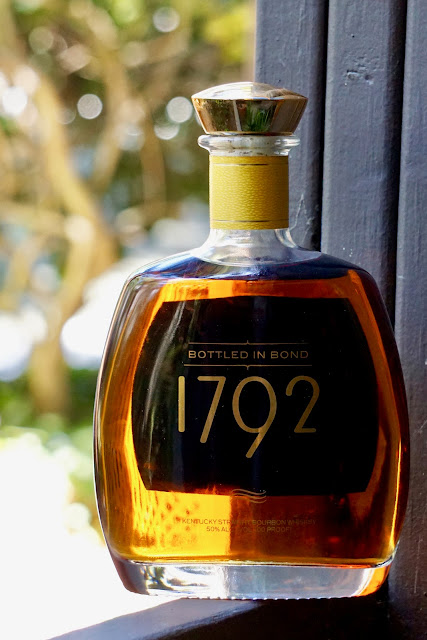 1792 Bottled in Bond (50.0%): Last week we had the chance to taste the entire line-up of 1792 including the soon be released 12yo in a tasting organized by Southern California Whisky Club. The master distiller of Barton 1792 Distillery Danny Kahn masterfully transformed a simple tasting into an invaluable masterclass with his vast biology and chemistry knowledge reminding us that there is still tons to learn no matter how much we think we know... He answered all our geeky questions in depth, explained every single step of their fermentation and distilling process and discussed tasting notes throughout the whole night with every single attendant. In the end if you leave the jaw dropping 12yo to one side (Hoping that I will manage to get my hands on one when it is released...) Bottled in Bond was my favorite of the line-up with an incredible price/value ratio. So I ordered one right away, picked it up yesterday and cracked it open right away. It is distilled from a mash bill of 75% corn, 15% rye and 10% malted barley, released annually since 2017 as a small batch bourbon and although it is not impossible to get one it sells out pretty quick after hitting the shelves every year.

Nose: Warm butter, cake batter and diner style banana cream pie. Honey glaze, orange cream frosting and candied orange peels. After allowing it air a little some caramel popcorn and peanut brittles you would expect in the beginning from a high corn mash bill like this. Subtle toasted ok and vanilla.

Overall: My notes from today totally match what I scribbled down the day we have tasted the the full line-up. It is still a winner... Although I dislike high corn mash bills in general this one really got me like Four Roses OE recipes always do. It is sweet but with less popcorn and peanut and more orange, honey and frosting notes. A very solid bourbon especially at this price range. It will be my new everyday pour for some time, well at least till I run out of this bottle.