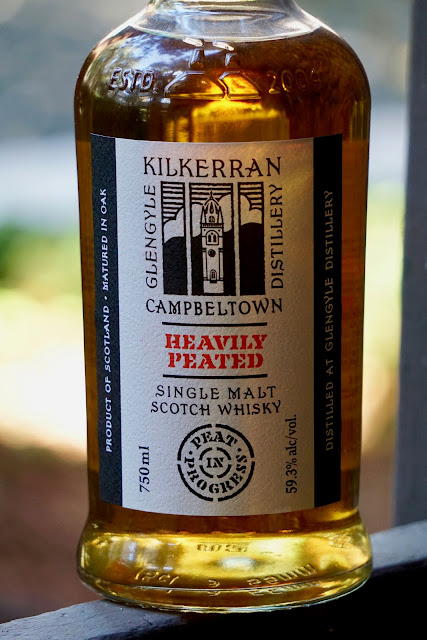 Kilkerran Heavily Peated (PIP) Batch. No.1 (59.3%): Pretty late for this review... Batch No.2 got released already earlier this month. Kilkerran Heavily Peated is being branded as "PIP: Peat in Progress" referring to the earlier hugely successful "WIP: Work in Progress" bottlings released between 2009 and 2015 before the distillery finally settled with a 12yo. PIP Batch No.1 is a three year old whisky bottled from a vat of 55% ex-bourbon and 45% ex-sherry casks. Only 9,000 bottles got released worldwide.

Palate: Very oily, thick and sweet. Still very very young but quite flavorful... By the way in case you were wondering where all that 59.3% alcohol was hiding in the nose you just got punched in the face. Barrel aged Genever, new make and charcoal. Time to add some water before it's too late to save my tastebuds: I am still getting those fresh underripe Concorde pears. Salt and lime, intense peat, cracked black peppercorns and anise seeds. Gunpowder tea and iodine tincture.

Finish: Long mostly with alcohol burn but we also get a good amount of black pepper, rock salt and dry peat.

Overall: Ok... On one side it is an incredibly impressive whisky for a three year old. It is more layered you would ever guess, it is surprisingly easy to drink despite its age and abv and filled with very exciting vegetal, herbal and coastal notes. I love very young peated whiskies with tons of character and this bottle is definitely delivering it. But on the other side new make qualities on the nose and palate are pretty dominant which would put off a lot of people, it is pricy for what it is and most importantly there is nothing in this whisky hinting that it is distilled in Glengyle Distillery or even in Campbeltown. It could be easily a new distillery on Islay or actually any of the new ones all around Scotland pumping the most peated malt they can put their hands on into their stills. I really miss the Kilkerran profile I love and look for in this release but I am confident that it will surface in coming batches when the new make profile phases out slowly and when the casks are allowed more time to interact with the spirit. A solid start to a long journey from Kilkerran... Cannot wait to see the development.