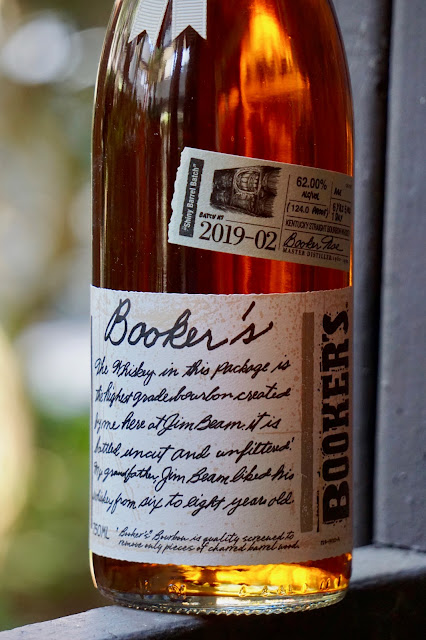 Booker's Batch No. 2019-02 (62.0%): This is the second batch of Booker's released this year and carries the name "Shiny Barrel" referring to the barrels suspiciously dusted off pointing out the whiskey in those being favored by warehouse workers more than the others around. It followed "Teresa's Batch" and followed by "Country Ham" in 2019 which is released pretty recently. For the warehouse geeks all of the barrels used for this batch got pulled from the centermost floors of three warehouses; 18% of them from the 6th floor of warehouse D, 39% from the 4th floor of warehouse E and 43% from the 4th floor of warehouse J. The whiskey is distilled from a mashbill of 77% corn, 13% rye and 10% malted barley and the youngest barrel in the batch was 6 years, 5 months and 1 day old.

Nose: Boiled peanuts, vanilla and caramel popcorn. Warm butter, maple candies and milk chocolate... Although I am not a huge fan of high corn recipes the nose is pretty intriguing... A few drops of water make it even better: Less peanuts and caramel but more oak, leather upholstery and cinnamon.

Palate: Peanut brittles, Werther's Original caramel candies and corn bread. Wood shavings, touch of black pepper and peanut butter. It's overly sweet and packed mostly with cornbread and peanut notes.. Water also doesn't help with sweetness like it did on the nose but it definitely adds some complexity: Poached plums and cooked raisins, apple-rhubarb pie and orange peel jam.

Overall: I have to admit that I have never been a big Booker's fan. That signature peanut and caramel corn profile never worked for me. Like I said above I don't like high corn bourbon recipes to begin with. I certainly had my favorite batches in years and I also tasted some batches I hated but this one actually falls kinda in the middle. I enjoyed the nose especially after adding water but the palate was still too sweet for me. At the end it is a good bourbon and I know lots of people would like it way more than I did but for me it is more of a whiskey to finish the night or maybe with a cup of black coffee or shot of espresso to balance its sweetness a little bit.