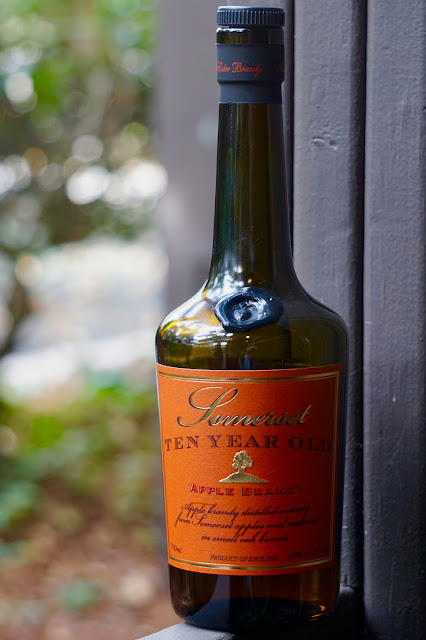 Somerset 10yo Apple Brandy (42.0%): Somerset county is located in northeast part of South West England and is one of the major apple juice producing and cider pressing regions in England employing more than 15,000 people in the industry. Apple orchards are all over the region stretching between every small town in the area and Burrow Hill, home of  Somerset Apple Brandy, is producing cider for over 200 years on their 180 acres property using forty different varieties of apple. This long family tradition naturally led producing apple brandies in time and Somerset granted UK's first ever distilling cider license in 1989.

Apples sourced from Burrow Hill are harvested every October and blended and pressed before being fed into large and old oak vats to be fermented. Half of the resulting cider is saved to be distilled in their two small stills named "Josephine" and "Fifi" which were originally brought from Normandy, France. While a small portion of the distillate is sold as eau de vie the rest is filled in 500 liter casks to be aged. The company has a line-up of 3, 5, 10, 15 and 20 year old expressions.

Following their international success Somerset Cider Brandy is recognized in 2009 by EU as a geographical indication, registered under Cider Brandy category and is protected by international laws since then. According to EU regulations to be labeled as Somerset Cider Brandy an apple brandy has to be distilled and matured in the county of Somerset in England, distilled from fermented fresh juice obtained by 100 but not less than 20 recognized traditional varieties of apple grown within Somerset county using pot or column stills smaller than 100 hectoliters through put per 24 hours, matured for a minimum of three years in French or American oak barrels not exceeding 700 liters in size which may have previously held sherry or port. No additions and/or chaptalization are allowed.

After all these technical info let's pour some brandy and start to take notes...

Palate: Amazingly balanced... Matured but not over-oaked, spicy but still very fruit forward. And all  these qualities are carried by an incredibly creamy and oily texture. I am getting a lot of green pear notes with the addition of Golden Delicious apples, neutral oak and latex balloons. Very flinty: Bunsen burner and propane. Cinnamon, nutmeg and ground cloves.

Finish: The creamy texture still works through the finish. Short with white pepper and apple juice. Coves and cinnamon. It is very mouth watering at the finish.

Overall: First of all I have to mention that I managed to purchase this bottle for $17 during K&L Wine Merchants' inventory clearance. $17..! Absolutely mental... I should have bought a case. That being said it is a very impressive brandy and can easily spar with its sister spirits distilled across the channel in Normandy. Although all the notes from nose to finish were more than impressive I think the best part was its texture. Loved the surprising flinty notes as well... Highly recommended.