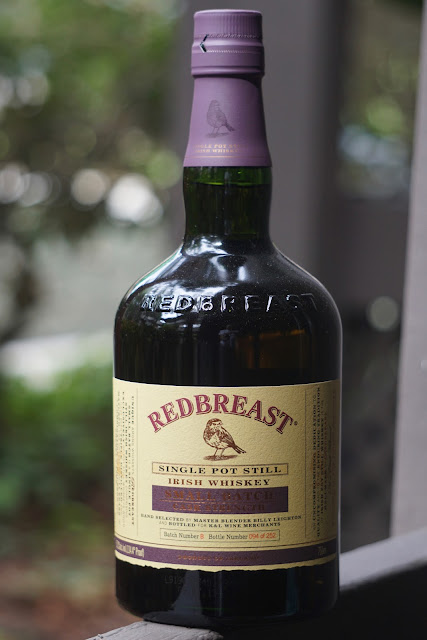 Redbreast 14yo "K&L Exclusive" Small Batch Cask Strength (57.2%): Belated St. Patrick's day post but hey, who cares..? We all lost our sense of time anyway. I also just realized that this post will be the third K&L exclusive whiskey review within a week on the blog. I really wasn't aware that I was hoarding so many bottles from them lately. This is quite an intriguing project though: Eleven US retailers one of them being K&L Wine Merchants worked together with Midleton Master Blender Billy Leighton to create four different small batch Redbreast bottlings to be released exclusively in their stores. All the batches were 14 year old and they were given letters from A to D to indicate from which batch they were. This one is the second batch, "Batch B". Apparently every single batch is blended to emphasize a different wood profile and this one is selected from whiskies which started their lives in ex-bourbon barrels and then racked into ex-Oloroso sherry butts. K&L's website says that each individual batch is blended from 22 - 27 barrels but this must be a typo since the label on this bottle says that "Batch B" yielded only 252 bottles. Unless we don't expect 20 more new releases of "Batch B" hitting the store shelves soon I will assume that the batch was from a single cask only. Also if you want to read the reviews of all four batches visit the one and only Diving fo Pearls and read their posts from March 16th through March 20th.

Palate: Surprisingly very Armagnac-like first... Neutral oak, raisins, grape seeds and grape skin. Peaches and apricots to follow. All kind of stone fruit pits... In time it gets quite bitter: Birch beer, tree bark and Ramazzotti. Dried flowers, dry sherry and fresh walnut skins. A few drops of water helps with the bitterness for me but still very dry and oaky.

Overall: It is definitely a whiskey you want to spend long time with... More appropriate as a night closer, something you don't want to have a second glass of necessarily and if I was a cigar smoker I would try to pair this whiskey with one. In general it's a great whiskey, no doubt about that. It definitely feels much older especially on the palate and also tastes like it contains a very generous amount of sherry cask matured and/or finished whiskeys in the batch. There are two things which made made me not scoring it higher though: Qualities of a single pot still whiskey are kinda lost for my two cents. In a blind tasting I would definitely guess it being a heavily sherried single malt Scotch. It's also a little too bitter and dry for my palate. Otherwise I am glad that I have a bottle...