on April 08, 2020
Last December after I posted my write-up "The Unbearable Dalmorization of Compass Box" about the limited releases and current market strategy of Compass Box I received tons of messages both encouraging and supportive and as you would expect also harshly criticizing and negative... I enjoyed immensely reading and replying all of them. To be honest nothing makes me feel better to see people taking their time to send messages and engaging conversations after reading a post of mine. But I believe by far the best response came from my good friend, fellow blogger and also West Coast Regional Manager of Paul John Whisky Koray Kaan Ozdemir a.k.a. Whisky Monster. He totally hit it out of the park with his sarcasm when he hand-delivered these four samples of late Compass Box Limited Editions without any comment but with a big smirk in his face. Well, message is taken and challenge is accepted my friend...

Obviously I don't have the real bottles. So don't expect any fancy photographs of National Gallery inspired labels or sparkly multicolor waxes but here is a photo of how I received them: In plain and simple dark Boston rounds with gold Sharpie codings scribbled on them in a rush... Love it..! Now without further ado Compass Box Limited Editions: 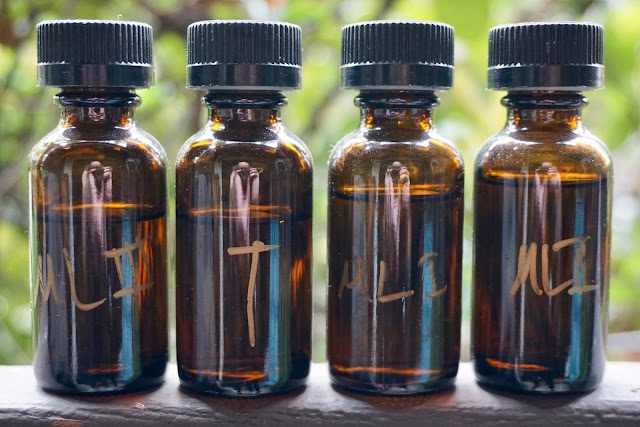 Myths & Legends I (46.0%): This blend is created by using barrels sourced from Balblair distillery only and therefore it is actually a single malt whisky rather than being a blended malt in contrast to what we usually see from Compass Box. Whiskies in the batch are matured in recharred American oak and first fill ex-Bourbon barrels latter being the more dominant component and aged 15-16 years and 22 years respectively. A total of 4,394 bottles have been made available worldwide.

Overall: If I could ever have a chance to work on a blend for myself with John Glaser this would be what I would be hoping for as a result. A textbook ex-Bourbon cask matured whisky and wizardly blending skills... It's fresh and citrusy supported by stone fruit and honey notes with a peppery and slightly tannic finish. Reminds me Raymond Armstrong era old Bladnoch bottlings I fell in love with in late 2000s and again some very old ex-Bourbon barrel aged Rosebanks I had the chance to taste back in time. Marvelous, marvelous whisky...

Myths & Legends II (46.0%): Second edition of Myths & Legends is also a single malt. All the casks went into the blend are sourced from Glen Elgin distillery this time which happens to be one of my favorite three under the radar "Glen" distilleries with Glentauchers and Glenlossie. I admit that I am mildly obsessed with them... Any day I have a chance to taste a different expression from one of these three distilleries is a good day for me. Anyhow, the whiskies are aged between 16 and 23 years and mostly matured in recharred and refilled American oak barrels and hogsheads with the addition of a small percentage of refill sherry butts. The batch yielded 4,446 bottles in total.

Color: Aged Chardonnay with thin and fast but oily legs.

Palate: Oily and thick texture. Clay, chamomile and creamy and crusty Napoleon pastry. All the dusty notes you would love expect from a well aged Glen Elgin are present. The palate is tad greener compared to more juicy and fruity nose. Banana peppers, dandelion leaves and thin slices of a fresh fennel bulb. Concorde pears and green almonds. Very subtle sherry influence surrounding all the green notes nicely with allspice, nutmeg and cinnamon.

Overall: An incredibly balanced whisky with a weighty mouthfeel. Definitely shows its age while preserving the viscosity of Glen Elgin's distillate. It is not that hard to tell that the first bottling of Myths & Legends stole my heart but this is a great whisky as well. Again, masterful blending...

Myths & Legends III (46.0%): Although the third edition of Myths & Legends uses around 85% casks from Glen Elgin distillery this time we are talking about a blended malt since the rest of the blend contains whiskies from Caol Ila and Highland Park. 4,564 bottles got released.

Color: Aged Chardonnay again but this time with thinner and faster legs.

Overall: Unfortunately the nose set my expectations so high there was nowhere else to go from there but down... It is definitely way thinner on the palate compared to the other two editions to a degree that actually is surprising but the nose is to die for. In the end Myths & Legends I is still my favorite in this series...

Tobias & The Angel (47.6%): And now the real "myth and the legend" itself: Tobias & The Angel... Before I dive right into the tasting notes here is an odd connection I just discovered: One of my favorite paintings on this planet is the "Saint George and the *Dragon" of Paolo Uccello. It is painted in 1470 and currently on display in the National Gallery, London where Andre del Verrocchio's "Tobias & The Angel" which was the inspiration of this whisky is displayed as well... As a coincidence both paintings are finished around the same time if not the same year, both are from the same school and both are housed in the same museum. Considering two paintings being from the same era I wouldn't be surprised if they were not displayed too far away from each other. I definitely should check them out when I visit London next time...

So, back to the whisky: It is almost a half and half blend of old whiskies sourced from Clynelish and Caol Ila distilleries. Both are aged in refill ex-Bourbon Hogsheads and the word on the street is that the batch contains 24yo Clynelish and 35yo Caol Ila casks... Well, if there is one person who knows how to blend Clynelish and Caol Ila perfectly it's John Glaser and let's see how he used his magic this time. This blend yielded 2,634 bottles worldwide.

Overall: I feel like everything I like about Scotch whisky is combined, distilled and then condensed back into my glass. This is a truly stunning whisky... I am still in awe and cannot think straight right now. It's impossible to comment for me whether it's worth the $500 price tag attached to its neck or not and probably I will never be able to. I honestly never spent that much money for a bottle of whisky in my life but if there is a bottle out there worth that much money this can be it. What do I know..?