on April 23, 2020
More than a year ago Malt Nuts put together an Ardmore tasting where twelve different independently bottled expressions tasted by club members with the addition of an official bottling being poured before the tasting kicked off. Although I was planning to attend the event that time I had to cancel last minute because of a sudden work call but my fellow club members were kind enough to go through trouble to save samples for me... So, all those samples were waiting on my desk for more than a year. Today looks like the day I will be starting to pour them one by one.

Let me remind you how Malt Nuts conduct their tastings first. The expressions are divided into flights arranged in advance known to one member only and every flight is tasted blind by the members... After sharing tasting notes with other members around the table and discussing a little the bottles in the flight are revealed and we move on to the next flight. Obviously I won't have the chance to have the same experience today since I already know which sample bottle contains which whisky but it  still will be a fun ride.

This tasting was divided in three different flights with the addition of Ardmore Legacy which was pre-poured for the guests before the tasting started like I mentioned above. The three flights were arranged by age and also how active the casks they matured in were. 1st flight contained six 8 year old and younger, 2nd flight two 8 - 9 year old and the 3rd flight four 8 - 12 year old whiskies. I'll put up my tasting notes on the blog in four different posts this one being the first one and covering the 1st flight in two separate posts.

Thanks to Josh Peters of The Whiskey Jug fame for sharing all the info he had in his notes about the bottles so I could find my way through these labels revealing much except their flight numbers and order.

Without further ado here is the Malt Nuts Ardmore tasting Part I: 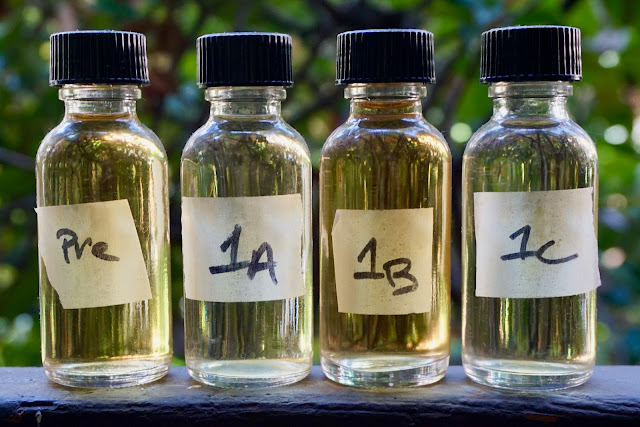 Overall: It is not a bad whisky considering that it is priced around $30 - $35 a bottle but it's just a little flat and uninspiring so to say. And for those who are old enough to remember Ardmore Traditional Cask which this expression replaced six or seven year ago it is more of a letdown to be honest.

Overall: It's very young without a doubt but as a person who likes spirit forward whiskies I liked it. It's lacking depth a little though but still an enjoyable sipper and bottled at a perfect strength.

Overall: To be honest I am not a fan of the heavy fatty palate... I assume that there is some sort of sherry cask influence here instead of ex-bourbon but hard to tell. Wouldn't want to have a second glass of this whisky.

Nose: I am really enjoying the nose of this one. Very spirity but in a nice way... Pebbles, unripe green pears and new make.

Palate: Hmm, unfortunately a little too young on the palate. New make spirit, underripe pears and green table grapes. Green wood and sawdust. Quite harsh and somehow hot on the palate.

Overall: I got really excited with the nose but the palate and the finish didn't deliver as much... Funny how we are being so accepting or actually forgiving when it comes to independent bottlers. If this was released by the distillery carrying the same price tag we would be on the streets protesting now... It is young, not immature but still hard for me to hate.