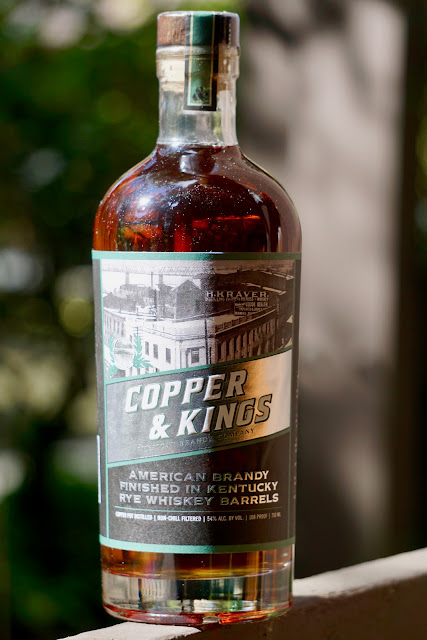 Copper & Kings "Peerless Rye Barrel" (54.0%): I should be in Campbeltown having fun with my friends at the Campbeltown Malts Festival this week... Well, all fell apart obviously because of you know what but we got together online a lot lately to catch up, share stories and of course drink together. I really lost track of time and did neglect the blog a little... Anyway, I am back now and have the fourth and last sample bottle from Copper & Kings on my desk today. It is another collaboration with no musical references this time but it is a neighborhood project instead. The ex-rye whiskey barrels they used to finish this brandy are sourced from their neighbors Peerless Distilling Co. which are situated a little more than two miles away from Copper & Kings Distillery. In a matter of fact although the focus of the modern Peerless Distilling Co. is on bourbon and rye whiskeys only the family used to be one of the major brandy distilleries in Louisville, Kentucky back in late 1800s. The release is a small batch blended using only four barrels. The brandy is distilled from Chenin, Colombard and Muscat grapes and aged first for five and a half years in ex-Bourbon barrels before it got transferred into the Peerless ex-rye whiskey barrels and kept there for an additional 16 months. I have to admit I was particularly excited about this one and that's why I chose to leave it to the last day.

Finish: Long, sweet and spicy. After all the fruity and floral notes fade out baking spices linger for longer. Cloves, ginger and cinnamon.

Overall: It wasn't a competition by any means but in the end this bottling happened to be my second favorite one among all the four limited releases I tasted in a row in last ten days right after their fifth anniversary release "A Song for You". I was expecting a more herbal, green and savory profile but I was pleasantly surprised by the sweet and floral profile of the distillate. The amount of time the brandy spent in ex-rye barrels is just enough to get the best out of them. A very satisfying brandy. Thanks again to Joe Heron and to everyone at Copper & Kings for sending us this generous sample package..! Always a pleasure to spend quality time with their brandies... Cannot wait to visit the distillery when all this is over.