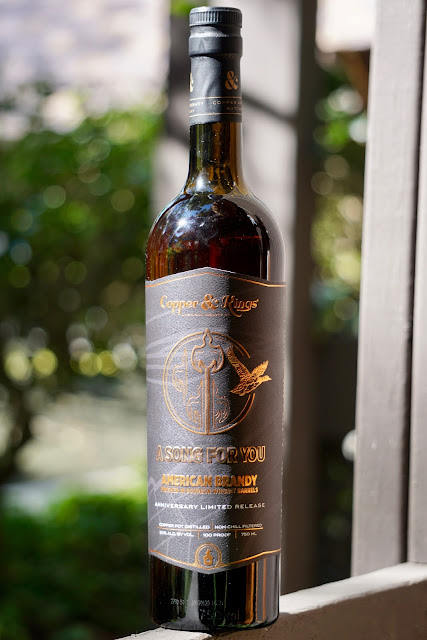 Copper & Kings "A Song for You" (50.0%): Of course Joe Heron had no clue how deep my Leon Russell obsession ran when he told me that some sample bottles were on their way to me. He didn't mention what he was sending, he just told me that they were some samples of their limited releases. When I opened the box the day it arrived and saw this label I literally squealed out loud thinking the name of the brandy was referring to the Leon Russell song "A Song for You". I couldn't believe that it was real... Well, I figured out later actually that it was referring to the Gram Parsons song with the same title instead which is another amazing song but I will never forget that very first moment I saw the label that morning... Thanks to Joe Heron and Copper & Kings for the samples and especially for choosing a very rad name for their very special fifth year anniversary bottle.

Ok, let's get back to business... Like I mentioned above this bottle is released for the fifth year anniversary of Copper & Kings distillery. After they started distilling and while their own spirit was aging in their warehouses they decided to outsource some brandy, blend them and then put them in ex-bourbon barrels for an additional maturation. That product became the early money spinner for the company for a few years and they named the blend "DNA1" for being the first generation brandy with the company's name on it. But they also planned to keep five barrels of "DNA1" aging even further to be bottled for their fifth anniversary... So, five years later those casks are released as a thank you note to their customers hence the name "A Song for You". It is pot distilled, not chill-filtered and not adulterated.

Color: Polished copper, orange blossom honey with a solid thin line all around the glass very slowly morphing into thin but oily legs.

Palate: Dried black currants, sour cherry juice and intensely dark chocolate. It is dry, tart and surprisingly a little hot at this abv. I wasn't planning but I will add a couple drops of water. Much better: Dark chocolate and cherry notes are still leading but they are at way more pleasant levels now. Charred wood, burnt toast and strawberry jam. Still reminds me of old grain whiskies a lot.

Overall: This could easily fool me as an old grain whisky in a blind tasting... Also it is hard to believe that ex-sherry and/or European oak casks were not involved in the maturation process. From nose to finish it feels older and also re-racked... Anyway, what I am trying to say is I was pleasantly surprised. It's a highly complex, luscious and textured brandy packed with red fruits, charred wood and grain notes. In the end it is a hell of a bottle to celebrate an anniversary Copper & Kings..! Thanks again for the sample...