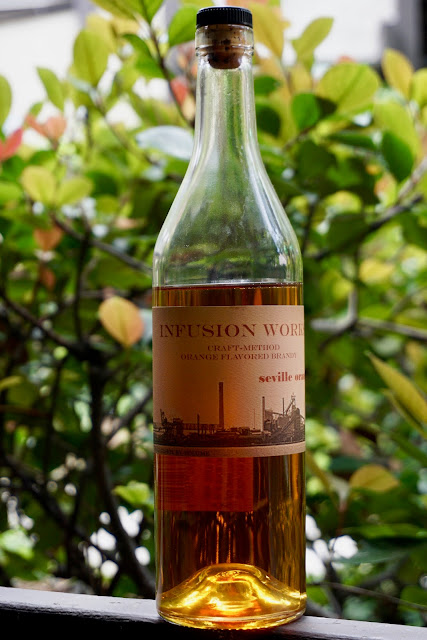 Germain-Robin Infusion Works Seville Orange (35.0%): This is a bottle from Germain-Robin's "Infusion Works" series they were experimenting with before the distillery has been acquired by Gallo in 2017. They disappeared from the market entirely right after the acquisition and recently got relaunched with two new releases. Probably they will come up with more expressions in the future after they re-establish the brand but they are taking it slow now. This bottle is like I mentioned above is released under "Infusion Works" label. It is a brandy infused with bitter orange peels which we also know as Seville orange. I figured out after some research that it has some added sugar in it but unfortunately couldn't find any additional info about its production and/or aging process.

Nose: Orange zest, orange marmalade and unlit matches. Orange bitters and Fanta. Well, it is pretty hard to get anything else but orange on the nose at this moment to be honest. It has a dusty quality I quite liked though...

Palate: Very oily, viscous and thick. Candied orange peel, simple syrup and orange peel marmalade. It is oozing sweet... Baklava syrup and orange oil. Definitely not what I was hoping to have in my glass today... It noses and tastes like a liqueur rather than being a "fruit infused" brandy.

Overall: Well, that didn't go like expected... It's basically an overly sweet orange liqueur. It might be a substitute for Triple Sec or Cointreau in cocktails but I really don't see myself drinking this by itself. Gosh, why did they need to add that much sugar in this..? When I first tasted it I thought that might be a good companion to a strong coffee or espresso but even for that purpose it is way too sweet. Yep, I think I will be looking for cocktail recipes with orange liqueurs for a while. Any suggestions..?