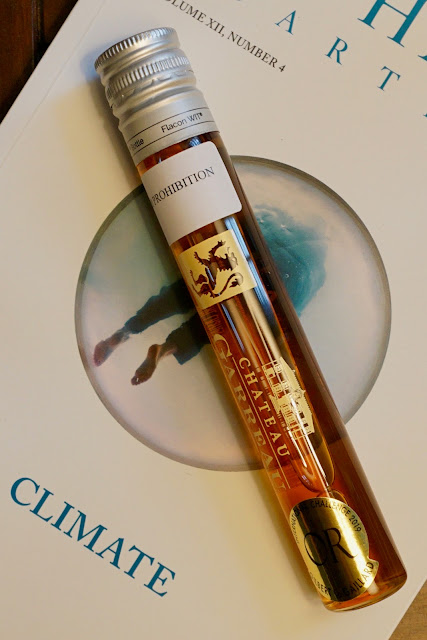 Chateau Garreau 100 Prohibition (40.0%): This time I have one of Chateau Garreau's special releases on my desk and it's called "100 Prohibition". Chateau Garreau is celebrating their 100th anniversary this year and it happened to be the same year as 100th anniversary of Prohibition as well. So, they came up with this bottling to mark the year and named it as "100 Prohibition". But there is a pun on the label which I could never figure out without Gregoire Fabre's help: "Hundred" is "cent" in French but if it's read out loud it also sounds like "sans" which means actually "without" in English... In the end if you read the label in French it might as well sound like "Without Prohibition". It is a blend of six to ten years old distillates matured in casks with various toasting levels to achieve a smokier taste profile.

Color: Orange blossom honey, medium amber with fast but thick and oily legs around the glass.

Nose: New oak, lightly toasted marshmallows and candied orange peel. Caramel pecan brittles, honey roasted nuts (Nuts 4 Nuts) and orange liquor. Sparkling orange soda and spearmint. This nose reminded me US craft spirits a lot... It might be the use of new oak, small barrels, heavier toast/char levels or simply relatively younger distillates but it definitely noses like a young American brandy to me.

Palate: It's a little thin on the palate and it's indeed young. Dandelion leaves, dill and mineral water. Wet cardboard boxes, pencil shavings and pine needles. I don't know if they were going for it or not because of the Prohibition theme but it really does taste like an American brandy right now. Underripe apricots, tin lunch boxes and burnt rosemary sprigs. Dry clay and eau de vie.

Overall: It's a pretty enjoyable blend for sure but that crafty feel on the nose and palate threw me off first a little... It still carries all the characteristics of their house style I liked very much before such as the earthiness, herbal notes and dryness but it's young and also a little thin in texture especially compared to other two expressions I tasted before. Thanks to Gregoire Fabre and Chateau Garreau once more for providing these samples. I have still two more for coming days.