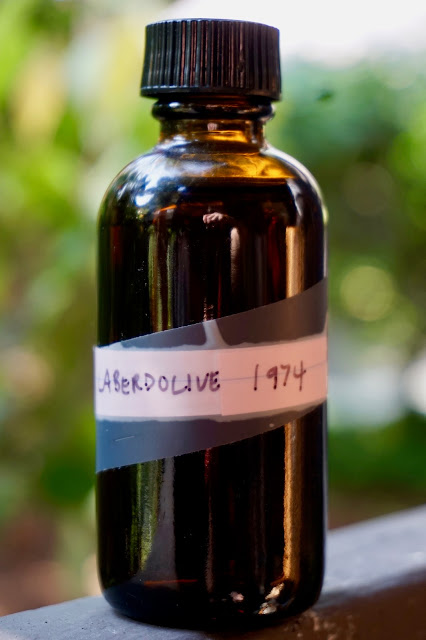 Laberdolive Domaine du Pillon 1974 (44.0%): After spending the entire last week with Chateau Garreau samples I decided to walk away a little bit and return to our "Six different vintages of Laberdolive" series. The third one in line for that is the 1974 vintage following the 1979 and 1976 vintages. This Armagnac is distilled from the grapes sourced exclusively from Domaine du Pillon unlike the other two vintages which were produced from the grapes harvested from Domaine de Jaurrey. I have been warned that this sample might be a little oxidized but let's pour it in the glass and see...

Color: Yellow gold, white Port color with a perfect circle of teardrops around the glass being very reluctant to start to flow down.

Palate: Hmm, too bad... Oxidation is more obvious on the palate. There are some interesting notes I can detect but it's impossible to tell what was there before and what got added after the oxidation kicked in. I said that because I am getting very interesting pomace brandy qualities here... Preserved grape leaves, grape seeds and young Grappa. Wet cardboard, ground coriander and ground ginger. Olive brine and sea salt and molasses.

Finish: Long with alcohol burn on either side of the tongue like an immature distillate. Mostly white pepper, coriander seeds and molasses.

Overall: I know that scoring it 49 and calling it oxidized is the right thing to do not to mislead anybody about Laberdolive's 1974 vintage in general but part of me really wanted to score it as it is because this Armagnac is actually still drinkable. I wish I had the same vintage from another bottle to compare them side by side to figure out which notes I scribbled down were supposed to be there. Well, it is what it is. It happens...