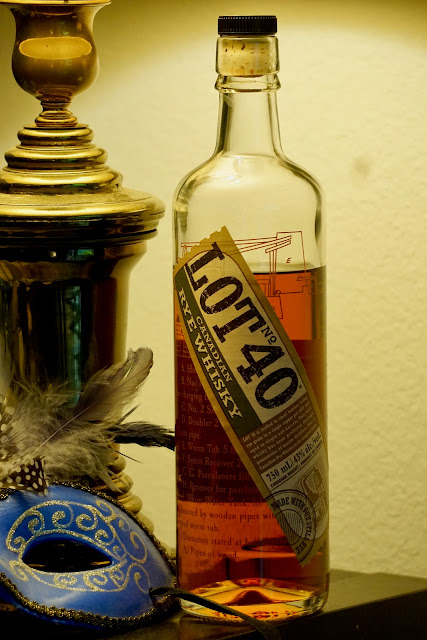 Lot No. 40 (43.0%): It occurred to me lately that I never revisited Lot No. 40 after its mashbill got changed from 90% unmalted rye and 10% malted rye to 100% unmalted rye almost three years ago. Let's fix that today... Lot No. 40 is one of the three expressions bottled under the "Northern Border Collection" umbrella by Corby Spirit and Wines along with Pike Creek and Gooderham & Worts. It is distilled first through a column still and then distilled for a second time in a pot still in Hiram Walker Distillery and aged in virgin oak barrels under the supervision of master distiller/blender Dr. Don Livermore. If you wish to compare the tasting notes later with the older bottling from 2016 you can simply click this "link".

Finish: Medium with allspice, cinnamon and cloves fading out first but it continues with red pepper flakes tad longer.

Overall: It's spicier and more peppery and less sweet than I remembered. I don't think that it is because of the slight change in the mashbill but it also feels a little younger than before which actually is completely understandable. This whisky got extremely popular in recent years and it might got slightly younger to keep the pricing and supply proportional to the increasing demand. The other night we mixed a Manhattan with it and it was sublime... But it is a great rye whisky regardless, in cocktails, neat or on the rocks.