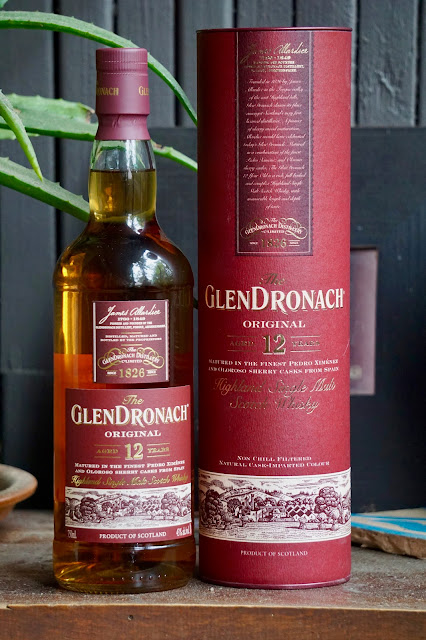 Glendronach 12yo (43.0%): Apparently my first take on Glendronach 12yo on this blog was more than nine years ago... Quite a lot changed since then. First in 2016 Brown Forman acquired the distillery and then in 2017 Rachel Barrie took over the master blender role leaving her position in Beam Suntory. Under the new ownership the distillery decided to be more conservative with their aged stocks and single cask releases and started to focus on the consistency of their regular line-up instead. But regardless of what the production strategies are 12yo has been always the flagship of Glendronach's portfolio. The whisky is loved and favored by thousands of sherry cask matured whisky lovers worldwide for many years especially because of its unbeatable price/value ratio advantage against their close competitors. It is matured (or finished..? I never could figure it out this with Glendronach) in a combination of Pedro Ximenez and Oloroso sherry casks, non-chill filtered and bottled in its natural color. Let's see if anything has changed for better or worse in the whisky in recent years.
Color: Medium amber, mahogany color with sparse and quick but thick legs.

Finish: Medium long with white pepper, cinnamon and cardamom. Gets drier while fading out... Ground ginger and coriander seeds.

Overall: It is very hard to keep track of how a particular expression changes incrementally over a decade even if you are going through a bottle at least once a year. Of course the best way would be tasting two bottles side by side, one from 2010 and one from 2020 but when I look at my tasting notes from nine years ago I can see how much I was talking about how thick, bold and chewy it is. Probably the most obvious change should have have been the texture since this bottling didn't show anything near. It's a nice sherried session whisky without a doubt but I think it's not as bold and big as it used to be... It is still one of the staples in my whisky cabinet but I think Glengoyne and Tamdhu are putting up products at this caliber for almost five years now if not longer. So, back then we were saying that Glendronach was threatening Macallan's throne but nowadays to be honest Glendronach's place doesn't look very safe as well.