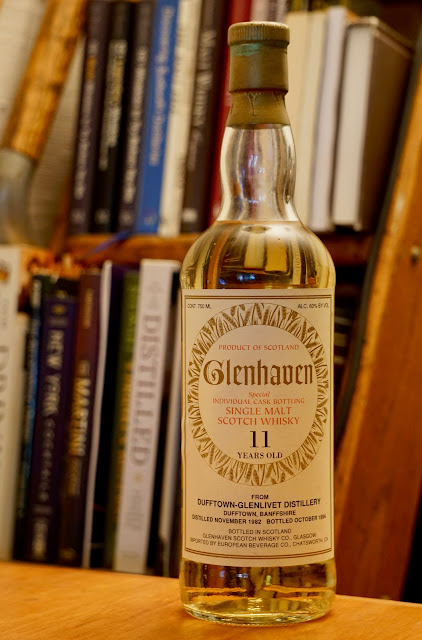 Glenhaven Dufftown 11yo (60.0%): Glenhaven used to be an independent bottling company which was active in mid 1990s in the US market. They bottled high proof, distillate focused single cask single malt Scotch whiskies with minimal cask influence. Sadly after their owner Bill Thompson's passing in 1997 the company got dissolved... I have always been a fan of what they bottled those years and I try to keep my eyes and ears open just in case if I can spot one bottle around still collecting dust on a shelf in an obscure liquor shop or in somebody's whisky cabinet. For example this bottle ended up with me more than five years ago along with a few other oddities as a result of a pretty satisfactory Scotch - Bourbon bottle swap. The whisky is distilled in Dufftown Distillery in November 1982 when the distillery was still owned and operated by Arthur Bell & Sons before being acquired by Guinness in 1985. Nowadays it is one of the busiest distilleries of Diageo pumping alcohol for their several blends including Bell's with a capacity of 6 million liters alcohol per year. This particular cask is bottled in October 1994 at 60% abv just one month before being a 12 year old whisky.

Nose: A little mute in the beginning. I will let it air for a while, the cork was sealed for 26 years after all. Yep, I am back in 15 minutes and it already started to deliver more: Dry crunchy malt, roasted cumin seeds and dead foliage. Sesame seeds and sipping water from a metal container on a very hot day. And after a few drops of water: Wet cardboard, old, worn out wooden bar counter and ground ginger. Rose water and breakfast cereals.

Palate: Pretty hot at this abv... Ground coriander, beeswax and white pepper. Adding water works so great on the palate. I was not making up that rose water thing on the nose: Rose water, vanilla and pinecones. Dried rosemary, crunchy cereals and kiln dried lumber. Dried pineapple rings and unsweetened banana chips.

Overall: Everything I like and I could hope for from an old timer Scotch. It's chalky, dry and spicy. Very spirit driven, kinda young but in excellent shape. It's muscular and vibrant... Probably a second fill ex-bourbon cask if not a third fill. I loved it and I can see clearly why this distillate is one of the favorites of Diageo's blenders. Well, I think it's that time to say again: "They don't make them like this anymore..!"